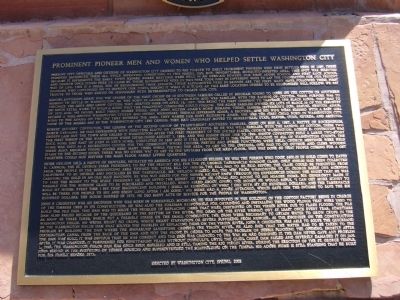 Present city officials and citizens of Washington City desired to pay tribute to early prominent pioneers who first settled here in 1857. These pioneers sacrificed their all while improving conditions in this harsh, dry, hot inhospitable, mosquito-infested area. This spot was selected because it represents the early town square where meetings were held in an open-air bowery. Our first adobe school and first rock school and church once stood here or close by. Those represented here in this park took part in different ways to lay the foundation for our present way of life. This is a small way of recognizing their efforts. Those represented here in bronze are the first. Many have followed these first pioneers who continued on to improve our town, making it what is is today. At this same location others to be recognized will follow. We pay tribute to those who stayed or struggled with determination to create our city.

Samuel Jefferson Adair was the leader of the first group of 10 southern families called by Brigham Young to come on the cotton or southern mission to settle in Washington. He was born in Laurens, South Carolina and was familiar 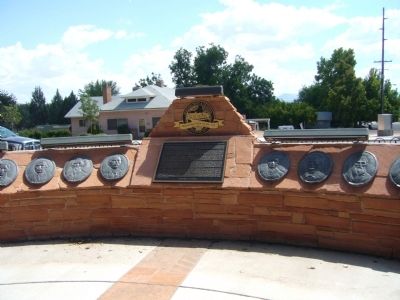 Click or scan to see
this page online
with raising cotton. Their purpose was to colonize the area and grow cotton. They arrived here on April 15, 1857. This being the first company to traverse the Black Ridge, they had to do much extra work to build a road that the following companies could follow. The Adair families owned six lots in block 35 of the resurvey of 1873 and, no doubt, built family homes there. Only John Milton Adair's home remains today. Samuel Jefferson's son, Samuel Newton Adair, became a well-known Washington citizen and Indian missionary. Thomas Jefferson Adair, a brother, and his wife were blessed with a baby girl born to the Adairs on the day they entered the area. They named her Mary Elizabeth Adair. She was the first child born in Washington City. None of the Adairs are in the Washington City 1880 census. They had gradually moved to Minersville, Utah, Beaver, Utah, Nevada, and Arizona.

Robert Dockery Covington, the leader of the second group of twenty-eight southern families, came on May 5, 1857. A native of Rockingham, North Carolina, he had experience with directing slaves on cotton plantations, so he was well familiar with the raising of cotton. These two groups laid out the town and called it Washington after the first President of the United States, George Washington. Robert D. Covington was the first Bishop of Washington Ward established August 1, 1858, and was Bishop from 1858 to 1869. Bishop Covington built a large two-story rock home just east of John D. Lee's home, completed in 1859 and is still standing. It is the oldest building in all of Washington County. The home was used as a recreation center for the community. Dances, parties and other functions were held. Church meetings were held there also. Brigham Young stayed here many times while visiting the area. To get to the upstairs, one had to go outside and climb wooden stairs to the second story. There was no other way to get to the upstairs from the main floor. This was done so that people coming for a get together could not disturb the main floor family living quarters.

Peter Neilson (Sr.), a native of Denmark, migrated to America for his religious beliefs. He was the person who took $600.00 in gold coins to David H. Cannon, the St. George Stake President, to pay the freight bill for the St. George Tabernacle window glass. Only $200.00 had been collected from the people in the surrounding area toward the total bill of $800.00. The bill had to be paid before the glass could be freighted from California to St. George and installed in the Tabernacle. Mr. Neilson walked all the way from Washington to St. George early one morning carrying the gold in an old blue bandana. He was not asked for the money; he just knew through his experiences during the night that he was to take the money to the Stake President. He had saved the money so that he could add rooms to this meager home. His generosity made it possible for the window glass to be purchased and installed. When asked about giving the money he would reply, "I can get more money to build my house. Every time I see that magnificent building I shall be reminded of what I did with my six hundred dollars, and the Tabernacle will be there for people to see and enjoy long after I am gone." His home had a store attached, which gave him the income to save the six hundred dollars. The house burned in 1975. He did many acts of service for the people of Washington.

John P. Chidester was an engineer who was born in Somerfield, Michigan. He was involved in the building of the Cotton Factory being in charge of the timbers used in its construction. He was also the foreman responsible for obtaining and installing the wood pilings that were used to build the pile dam. This dam was to solve the problem of replacing dams that were destroyed on the Virgin River due to flash floods. The pile dam also failed because of the quicksand in the bottom of the river. The dams on the river washed out at least once every year. Sometimes as many as three times, which put a terrible stress on the small community. The dams were necessary to obtain water to grow crops in the Washington fields. No water meant no crops, which meant starvation or severe suffering from hunger. As the engineer on the construction of the Washington Fields Dam that solved the problem of replacing dams on the Virgin River, John P Chidester was able to solve the quicksand problem by building the dam where the shinarump sandstone crossed the Virgin River. He also said that the water had to be taken to the distribution can from the back of the dam and not the front in order to solve the problem of debris plugging the opening. Shortly after the dam was built, it was obvious that he was correct and dam was changed to the way he designed it. The dam never gave any problem after it was changed. It performed for ninety-eight years without difficulty, until the Quail Creek Dam failed and severely damaged it on Jan 1, 1989. The Washington Fields Dam has since been repaired and is still taming the Rio Virgin River. During erection of the St. George Temple, John served in the surveying of timber sources and superintended the scaffolding on the Temple. His adobe home is still standing that he built for his family before 1873.

Topics. This historical marker is listed in these topic lists: Churches & Religion • Education • Settlements & Settlers. A significant historical month for this entry is April 1857.