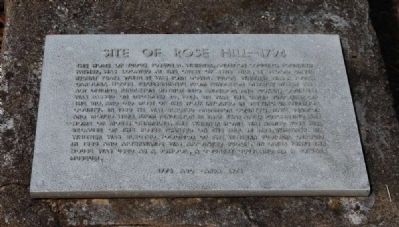 Photographed By Brian Scott, September 9, 2012
1. Site of Rose Hill -- 1794 Marker
Inscription.
Site of Rose Hill -- 1794. . , The home of Judge Joseph N. Whitner, Anderson County's founding father, was located at the crest of this will. It stood until recent years when it was torn down. Judge Whitner was a South Carolina House of Representative from Pendleton District when the act dividing Pendleton District into Anderson and Pickens Counties was passed on December 20, 1826. He was the chief supporter of the bill and did most of the work involved in setting up Anderson County. In 1830 he was elected Anderson County's state senator and moved here from Pendleton in that year after purchasing the home of Moses Chamblee. The Whitner home was named Rose Hill because of the roses planted on the hill by Mrs. Whitner. Mr. Whitner was elected Solicitor of the Western Judicial District in 1835 and afterwards was appointed judge. In later years the house was used as a school, a country club, and as a private museum. . This historical marker was erected in 1976 by Abc--Arba. It is in Anderson in Anderson County South Carolina

The home of Judge Joseph N. Whitner, Anderson County's founding father, was located at the crest of this will. It stood until recent years when it was torn down. Judge Whitner was a South Carolina House of Representative from Pendleton District when the act dividing Pendleton District into Anderson and Pickens Counties was passed on December 20, 1826. He was the chief supporter of the bill and did most of the work involved in setting up Anderson County. In 1830 he was elected Anderson County's state senator and moved here from Pendleton in that year after purchasing the home of Moses Chamblee. The Whitner home was named Rose Hill because of the roses planted on the hill by Mrs. Whitner. Mr. Whitner was elected Solicitor of the Western Judicial District in 1835 and afterwards was appointed judge. In later years the house was used as a school, a country club, and as a private museum.

Topics. This historical marker is listed in this topic list: Notable Buildings. A significant historical month for this entry is December 1964. 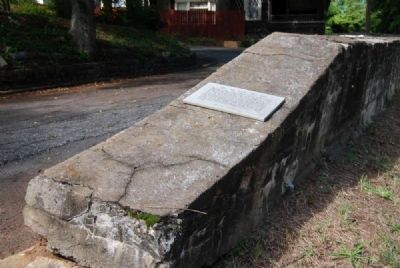 Additional commentary.
1. Joseph N. Whitner
Judge Whitner was one of the kindest most amiable and best of men. He was benevolent and charitable to all who were in want. He was sincerely a Christian and a very pious member of the Presbyterian Church all his life. And yet with all his amiability and goodness he possessed a nervous and excitable temper by nature. But his good sense and good feelings rarely permitted his temper to manifest itself on any occasion public or private. 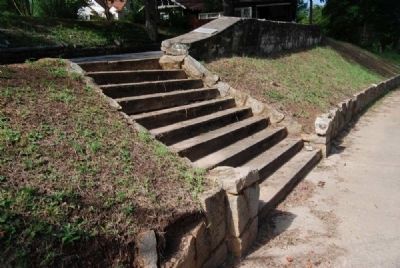 Photographed By Brian Scott, September 9, 2012
3. Stairs Leading to Rose Hill
On the bench and at the bar he was always patient forbearing and courteous Never was there a more conscientious man in the discharge of all his duties in every relation of life whether public or private. This conscientiousness and anxiety to do right and act properly under all circumstances very often produced a hesitation in his action and decision. It was sometimes discoverable on the bench He hesitated and doubted where a judge with less conscientiousness would have decided at once although his convictions were as doubtful as Judge Whitner's.

Judge Whitner was born on George's creek in Pickens county about seven miles from Greenville Court house. His father moved near Pendleton village where he was brought up and educated till he entered the South Carolina College of which institution he was a graduate. He read law and was admitted to the bar and settled at old Cambridge. But after a short residence there he moved to Pendleton Court house and formed a partnership with Judge Earle who was then solicitor of the Western Circuit. Judge Whitner was very soon elected a member of the Legislature from Pendleton district. He assisted mainly in the division of the district into Anderson and Pickens districts. Since that Pickens has been divided again into Oconee and Pickens districts. Whilst Pendleton still remained one senatorial district Judge Whitner was elected to represent 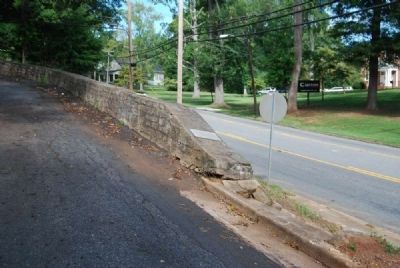 Photographed By Brian Scott, September 9, 2012
4. Site of Rose Hill -- 1794 Marker
it in the State Senate. He was then elected solicitor of the Western Circuit and for many years he discharged the onerous duties of this office with great ability and efficiency. Some years before his elevation to the bench there was an election of judge before the Legislature. This contest was very close and one of the votes intended for Whitner was written Whiten. If this vote had been counted he would have had a majority and been elected. But on the second ballot Judge Withers was elected. The next vacancy that occurred on the bench Judge Withers was elected to fill and he remained on the bench till his death many years afterwards. Whilst solicitor he was put in nomination for Congress very much against his wishes. There was a high political excitement in the State on the subject of the sub treasury. General Thompson who was then representing the district in Congress differed with Mr Calhoun on this subject and an effort was made by Mr Calhoun and his friends to turn him out. Judge Whitner at that time was perhaps the most popular man in the congressional district. He was therefore put in nomination but his personal popularity availed him nothing in the excitement. His warmest and most devoted friends voted against him. The returns from the different precincts in Anderson district were brought to Pickens Court house whilst court was sitting there. Whitner looked over the statement 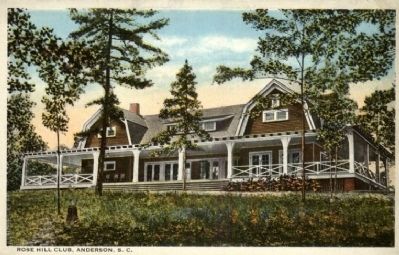 Photographed By Brian Scott
5. Rose Hill Country Club
Historic Postcard
and said to me, "I really thought I could have got more votes than I did at some of these boxes for President of the United States." So true it is that friendship gratitude and personal respect are all thrown aside in a political excitement when an election takes place.

Judge Whitner was a great temperance man and a sort of lieutenant general of Chief Justice O'Neall in the temperance cause. Whilst O Neall was on the circuit and Whitner was solicitor they invariably had temperance lectures at all the courthouses. I have no doubt that if both of these gentlemen had taken a glass of brandy every day in the latter part of their lives they would have lived much longer. When Judge Whitner was on his death bed he sent for Doctor Fair of Columbia to visit and prescribe for him. The Doctor told him to eat nourishing food and drink brandy. But the prescription came too late. After Doctor Fair's visit, Judge Munro called to see his brother Whitner, when the latter said to him, "I am now going to do what I have never done before, to take a glass of brandy with me."

As to carrying deadly weapons about one's person Judge Whitner told me the following circumstance in reference to himself self. He was a student in Union village when the deputy sheriff came to arrest him on some very trivial matter. Playfully he pulled out a pistol and told the deputy he would not be arrested. He did it as a joke and supposed it would be well received as such by a man whom he knew very well and with whom he was on the best of terms. But mistaking the motive the deputy flew into a passion jumped from his horse and said, "I will arrest you at the risk of my life." Judge Whitner said his nature seemed suddenly to change all reflection thrown away and if the man had advanced he would have shot and perhaps killed him.

Judge Whitner married the only daughter of James Harrison Esq who still survives him and by whom he had a large family of children. They were all educated with great care and prospered in life. The Judge lived in great elegance and with great hospitality. He kept an open house for friends and visitors at all times and on all occasions. Although a strict Presbyterian he had all his children taught to play on some musical instrument and a visitor would see two or three violins and flutes lying about his house. He encouraged the people to dance for amusement of a winter's evening and made his home a happy one for all his family and visitors. I remember hearing a gentleman from Charleston say that he had never seen more elegance or finer entertainments than he met at Judge Whitner's.

The Judge was a cotton planter for a number of years in Florida but I understood him not many years before his death that he had not found planting in Florida very profitable. To plant profitably a gentleman must live on his plantation and supervise everything.

In early life Judge Whitner took great pride in commanding a troop of cavalry and was afterwards elected brigadier general when I had the honor of being appointed on his staff with the rank of major which has stuck to me through life. But my friend Richard Yeadon always denied my rank and insisted that I was only a captain and could be nothing higher on a brigadier's staff. When the ordinance of nullification was passed all the militia commissions were vacated by act of the Legislature and General Whitner refused to be reelected. General Waddy Thompson was elected in his place. He was however a strong nullifier and secessionist though a sincere Christian loving peace and good will to all mankind. Shortly after the first battle of Mannassas I traveled to Virginia with Judge Whitner and his most amiable lady who were on a visit to a son who was wounded in the battle. Mrs Whitner who was always an esteemed and valued friend of mine observed to me that she never thought our political excitement would come to a deadly civil strife or she would not have been in favor of secession. I replied, "I had no doubt thousands and hundreds of thousands entertained the same sentiments and feelings but that I had always anticipated such a result and was therefore bitterly opposed to the movement." (Source: South Carolina Bench and Bar, Volume 1, by Ulysses Robert Brooks, article by Gov. B.F. Perry.)
— Submitted September 10, 2012, by Brian Scott of Anderson, South Carolina.
Credits. This page was last revised on June 16, 2016. It was originally submitted on September 10, 2012, by Brian Scott of Anderson, South Carolina. This page has been viewed 945 times since then and 59 times this year. Photos:   1, 2, 3, 4, 5. submitted on September 10, 2012, by Brian Scott of Anderson, South Carolina.
Share this page.