Many Came by Handcart 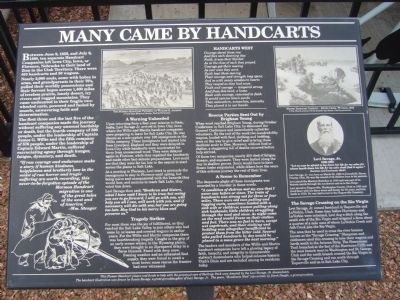 Between June 9, 1856, and July 6, 1860, ten separate Handcart Companies left Iowa City, Iowa, or Florence, Nebraska to their land of Zion in the Utah Territory. There were 653 handcarts and 50 wagons.
Nearly 3,000 souls, some with babes in arms, and grandparents in their 70’s, pulled their worldly possessions and their fervent hopes across 1,400 miles of treeless prairie, lonely desert, icy rivers and rugged mountains. They came undaunted in their fragile two-wheeled carts, powered and fueled by muscle, unwavering faith and determination.
The first three and the last five of the handcart companies made the journey without suffering any unusual hardship or death, but the fourth company of 500 people, under the leadership of Captain James G. Willie and the fifth company of 576 people, under the leadership of Captain Edward Martin, suffered excruciating agony through hunger, fatigue, dysentery, and death.
“If raw courage and endurance make a story; if human kindness, helpfulness and brotherly love in the midst of raw horror and tragic suffering are worth recording, this never-to-be-forgotten episode of the Mormon Handcart 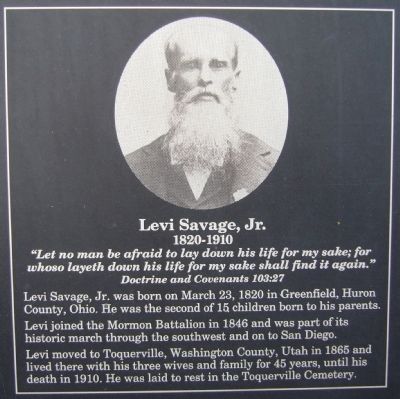 A Warning Unheeded
Upon returning from a four-year mission to Siam, India, Levi Savage Jr. arrived in Iowa City, Iowa where the Willie and Martin handcart companies were preparing to leave for Salt Lake City. He was chosen as a sub-captain over 100 immigrants in the Willie Company. These immigrants had started late from Liverpool, England and they were delayed in Iowa City while handcarts were constructed for them from unseasoned wood. They were delayed again in Florence, while they repaired the handcarts and made other last minute preparations. Levi could see that they were far too late in the season to start across the plains to Salt Lake.
At a meeting in Florence, Levi tried to persuade the immigrants to stay in Florence until spring, but being naïve and unacquainted with the hazards they would face, and anxious to reach Salt Lake, they voted him down.
Levi Savage then said, “Brethren and Sisters, what I have said I know to be true; but seeing you are to go forward, I will go with you, will help you all I can, will work with you, and if necessary, will die with you; but you are going too late. May God in his mercy bless and preserve us.”
Tragedy Strikes
For most there was the joy of fulfillment, as they reached the 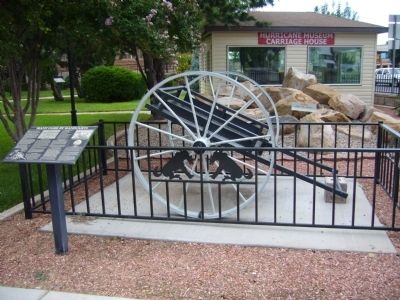 By Bill Kirchner, August 28, 2012
3. Many Came by Handcart Marker
Salt Lake Valley, to join others who had come by ox teams and covered wagons in earlier years. For the Willie and Martin companies there was heartbreaking tragedy. Caught in the grip of an early severe winter, in the Wyoming plains, they were brought to an ill prepared delay in a fierce blizzard. Faced with deep snow, freezing weather and an exhausted food supply, they were forced to await a most heroic mass rescue the frontier had ever witnessed.
Rescue Parties Sent Out by Brigham Young
When word reached Brigham Young, during October Conference in Salt Lake City, he dismissed the General Conference and immediately called for volunteers. By the end of the week two-hundred-fifty wagons, loaded with food, clothing and bedding, were on the way to give relief and to bring these destitute souls to Zion. However, without food or shelter, a staggering toll of deaths occurred before help arrived.
Of these two companies, nearly 250 died of fatigue, disease, and exposure. They were buried along the way in shallow graves. Some would have to have frozen limbs amputated, while others bore the scars of this arduous journey the rest of their lives.
A Scene to Remember
The desperate plight of these immigrants was recorded by a traveler in these words. “A condition of distress met my eyes that I never saw before or since. The train of handcarts was strung out for three or four miles. There were old men pulling and tugging carts, sometimes loaded with a sick wife or children; women pulling along sick husbands; little children struggling through the mud and snow. As night came on the mud would freeze on their clothes and feet. There was no fuel to burn, except wet sagebrush, and their clothing and bedding now altogether insufficient to protect them from the bitter cold. Several who pulled handcarts by day would be placed in a mass grave the next morning.”
The leaders and members of the Willie and Martin handcart companies have left a glowing legacy of faith, tenacity, and integrity to innumerable stalwart descendants who helped colonize historic Utah’s Dixie and are included among its residents today.
The Savage Crossing on the Rio Virgin
Levi Savage, Jr. owned farmland in Toquerville and LaVerkin, Utah. Some time before Hurricane and LaVerkin were colonized, Levi dug a ditch along the south side of the Rio Virgin and irrigated a farm about a quarter of a mile west of where LaVerkin Creek and Ash Creek join the Rio Virgin.
The area that he used to cross the river became known as the “Savage Crossing.” Sheep men and cattlemen used this crossing to take their wagons and herds south to the Arizona Strip. The Honeymoon Trail branched at the foot of the Hurricane Cliffs and the west branch went to Washington and St. George, Utah and the north branch crossed the Rio Virgin at the Savage Crossing and ran north through Toquerville and on to Salt Lake City.

Levi Savage, Jr.
1820-1910
“Let no man be afraid to lay down his life for my sake; for whoso layeth down his life for my sake shall find it again.”
Levi Savage, Jr. was born on March 23, 1820 in Greenfield, Huron County, Ohio. He was the second of 15 children born to his parents. Levi joined the Mormon Battalion in 1846 and was part of the historic march through the southwest and on to San Diego. Levi moved to Toquerville, Washington County, Utah in 1865 and lived there with his three wives and family for 45 years, until his death in 1910. He was laid to rest in the Toquerville Cemetery.

Handcarts West
Courage dared them rise And face each dawning day. Faith, it was their blanket As at the close of each they prayed. Courage got them moving As ever west they went. Faith kept them moving Their courage and strength long spent. And so with weary windworn hearts They reaped as they had sown. Faith and courage—tempered strong And from this land, a home. Built with courage, cemented in faith It would survive time’s sands. Then somewhere, somewhen, somewhy They placed it in our hands. By Derek Naegle, a great-grandson

Topics and series. This historical marker is listed in these topic lists: Disasters • Roads & Vehicles • Settlements & Settlers. In addition, it is included in the Mormon Pioneer Trail series list.