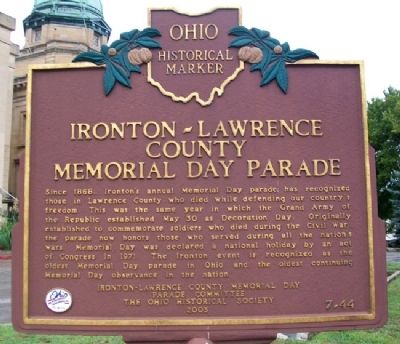 Since 1868, Ironton's annual Memorial Day parade has recognized those in Lawrence County who died while defending our country's freedom. This was the same year in which the Grand Army of the Republic established May 30 as Decoration Day. Originally established to commemorate soldiers who died during the Civil War, the parade now honors those who served during all the nation's wars. Memorial Day was declared a national holiday by an act of Congress in 1971. The Ironton event is recognized as the oldest Memorial Day parade in Ohio and the oldest continuing Memorial Day observance in the nation.

Topics and series. This historical marker is listed in these topic lists: Entertainment • Patriots & Patriotism • War, US Civil. In addition, it is included in the Ohio Historical Society / The Ohio History Connection series list. A significant historical date for this entry is May 30, 1820. 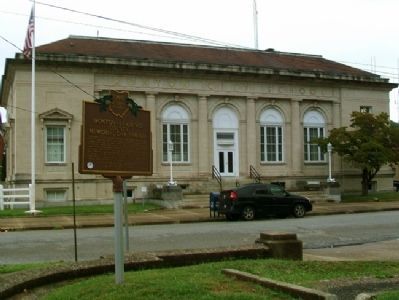 Click or scan to see
this page online
Marker is in Ironton, Ohio, in Lawrence County. Marker is at the intersection of Center Street and 5th Street, on the right when traveling east on Center Street. Marker is on the north grounds of the county courthouse. Touch for map. Marker is at or near this postal address: 111 South 4th Street, Ironton OH 45638, United States of America. Touch for directions.

Other nearby markers. At least 8 other markers are within one mile of this marker, measured as the crow flies. Replica of the Statue of Liberty (within shouting distance of this marker); Lawrence County Veterans Square (within shouting distance of this marker); Lawrence County Viet-Nam Veterans Memorial (about 300 feet away, measured in a direct line); The Hanging Rock Iron Region / The Blast Furnaces of Lawrence County (about 300 feet away); John Campbell Memorial Home (approx. 0.2 miles away); Unger's Shoes (approx. 0.2 miles away); City of Ironton (approx. ¼ mile away); Tanks Memorial Stadium Opening Day Nov. 25, 1926 (approx. one mile away). Touch for a list and map of all markers in Ironton. 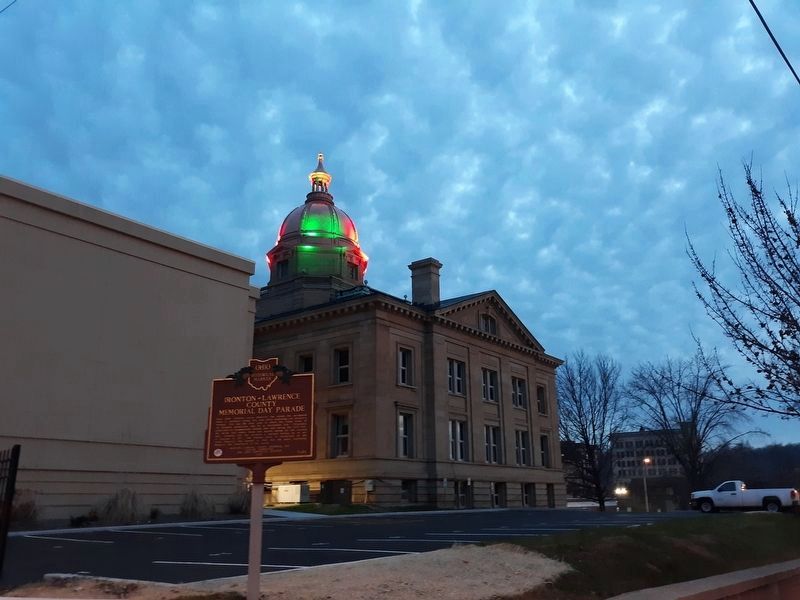