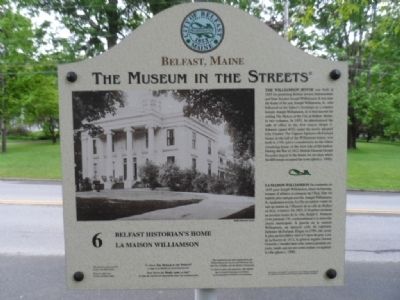 Photographed By James True, May 29, 2012
1. Belfast Historian's Home Marker
Inscription.
, The Williamson House was built in 1845 for prominent Belfast lawyer, businessman, and State Senator Joseph Williamson. It was later the house of his son, Joseph Williamson, Jr., who followed in his father's footsteps as a country lawyer. Joseph Williamson, Jr. is best known for writing The History of the City of Belfast, Maine, in two volumes. In 1853, he administered the oath of office to the first mayor, Ralph C. Johnson (panel #19), under the newly adopted City Charter. The Captain Ephraim McFarland house, to the left of the Williamson house, was built in 1799, and is considered to be the oldest remaining house on the west side of the harbor. During the war of 18 12, British General Gerard Gosselin stayed in the house for six days while his 600 troops occupied the town (photo c. 1900)., . This historical marker was erected in 2004 by The Museum in the Streets®. It is in Belfast in Waldo County Maine