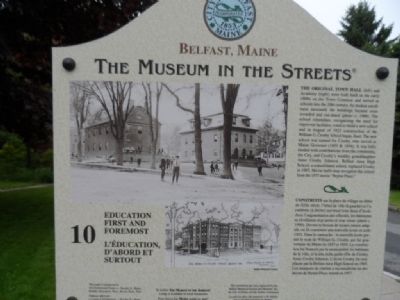 Photographed By James True, May 29, 2012
1. Education First and Foremost Marker
Inscription.
, The Original Town Hall (left) and Academy (right) were both built in the early 1800s on the Town Common and served as schools into the 20th century. As student enrollment increased, the buildings became over-crowded and out-dated (photo c. 1900). The school committee, recognizing the need for improved facilities, voted to build a new school and in August of 1923 construction of the William G. Crosby School began., . This historical marker was erected in 2004 by The Museum in the Streets®. It is in Belfast in Waldo County Maine