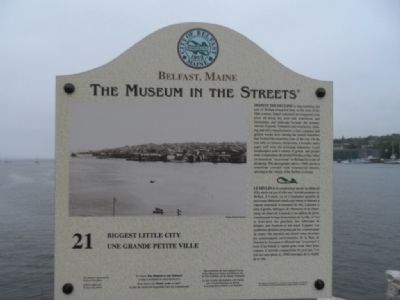 Photographed By James True, May 29, 2012
1. Biggest Little City Marker
Inscription.
, Despite the decline in ship building, the port of Belfast remained busy at the turn of the 20th century. Rapid industrial development took place all along the west side waterfront, and steamships and railroads became the primary movers of goods. Granaries and creameries, clothing and shoe manufacturers, a fuel company and granite works were among the varied industries that formed the economic base of the city. On the east side, ice houses, brickworks, a foundry, and a paper mill were the principal industries. Local shopkeepers sold a variety of goods, and people from communities all around Penobscot Bay relied on steamboat "excursions" to Belfast for a day of shopping. The photograph, taken c. 1900, shows a waterfront crowded with commercial interest, attesting to the vitality of the Belfast economy., . This historical marker was erected in 2004 by The Museum in the Streets®. It is in Belfast in Waldo County Maine