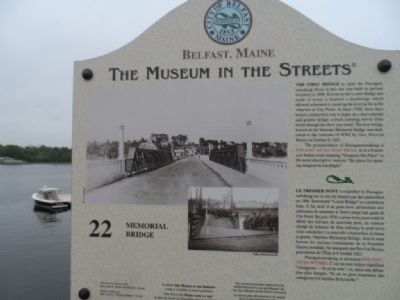 Photographed By James True, May 29, 2012
1. Memorial Bridge Marker
Inscription.
, The first bridge to span the Passagassawakeag River at this site was built by private investors in 1806. Known as the Lower Bridge and made of wood, it featured a drawbridge which allowed schooners to travel up the river as far as the wharfs at City Point. In June 1920, three days before construction was to begin on a new concrete and granite bridge, a truck carrying movie films broke through the draw (see inset). The new bridge, known as the Veterans Memorial Bridge was dedicated to the veterans of world war one by Gov. Percival Baxter on October 8, 1921. , The pronunciation of Passagassawakeag is PAS-SAG'-AS-SA-WAU'-KEAG. It is a Penobscot Indian word meaning "Sturgeon-His Place" or the more descriptive version, "the place for spearing sturgeon by torchlight.", . This historical marker was erected in 2004 by The Museum in the Streets®. It is in Belfast in Waldo County Maine