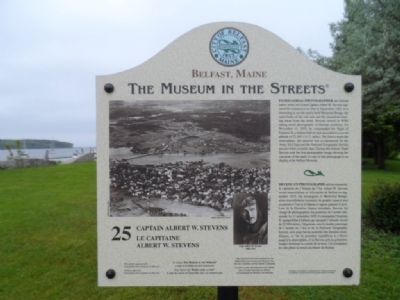 Photographed By James True, May 29, 2012
1. Captain Albert W. Stevens Marker
Inscription.
, Famed aerial photographer and Belfast native Army Air Corps Captain Albert W. Stevens captured his hometown on film in September 1923. It is interesting to see the newly built Memorial Bridge, the open fields of the east side and the steamboat heading away from the dock. Stevens served in world war one taking aerial photographs of German positions. On November 11, 1935, he commanded the flight of Explorer II, a helium balloon that ascended to a record altitude of 72,395' (13.71 miles). The first to reach the stratosphere, the mission was co-sponsored by the Army Air Corps and the National Geographic Society and provided scientific data. During this historic flight Stevens took the first photographic image showing the curvature of the earth. A copy of this photograph is on display at the Belfast Museum., . This historical marker was erected in 2004 by The Museum in the Streets®. It is in Belfast in Waldo County Maine