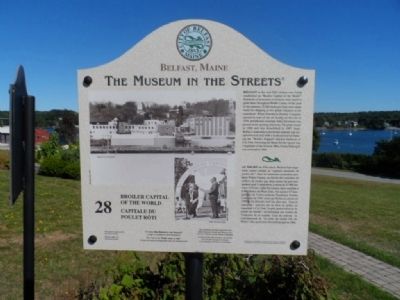 Photographed By James True, September 1, 2012
1. Broiler Capital of the World Marker
Inscription.
, Belfast in the mid-20th century was firmly established as "Broiler Capital of the World". Hundreds of thousands of chickens were raised in giant barns throughout Waldo County. At the peak of the industry 22,000 birds per hour were made ready for shipping at two plants situated on the waterfront. When Penobscot Poultry Company opened its state-of-the-art facility on this site in 1956, presidential candidate Adlai Stevenson was present at the opening ceremony. The plant closed in 1988 and was demolished in 1997., . This historical marker was erected in 2004 by The Museum in the Streets®. It is in Belfast in Waldo County Maine