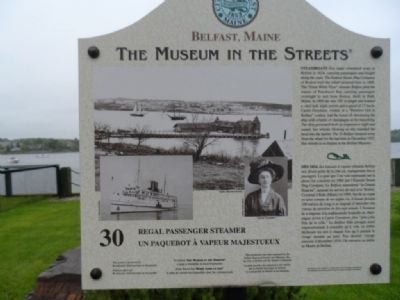 Photographed By James True, May 29, 2012
1. Regal Passenger Steamer Marker
Inscription.
, Steamboats first made scheduled stops in Belfast in 1824, carrying passengers and freight along the coast. The Eastern Steam Ship Company of Boston built the wharf pictured here in 1888. The "Great White Flyer" steamer Belfast plied the waters of Penobscot Bay carrying passengers overnight to and from Boston. Built in Bath, Maine, in 1909 she was 320' in length and boasted a steel hull, triple screws and speed of 17 knots. Carrie Greenlaw, winner of a "Prettiest Girl in Belfast" contest, had the honor of christening the ship with a bottle of champagne at the launching. The ship presented both an impressive sight and sound, her whistle blowing as she rounded the bend into the harbor. The SS Belfast steamed away from the wharf for the last time in December 1935. Her whistle is on display at the Belfast Museum., . This historical marker was erected in 2004 by The Museum in the Streets®. It is in Belfast in Waldo County Maine