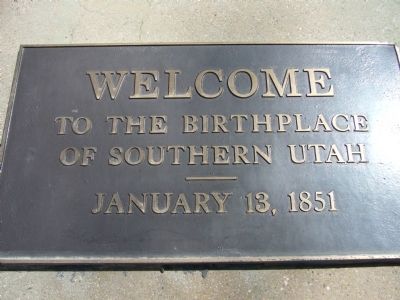 Welcome
to the Birthplace of Southern Utah
January 13, 1851

Topics. This historical marker is listed in these topic lists: Exploration • Settlements & Settlers. A significant historical month for this entry is January 1829. 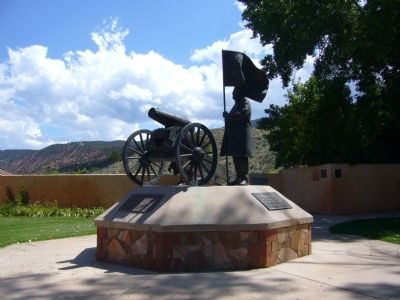 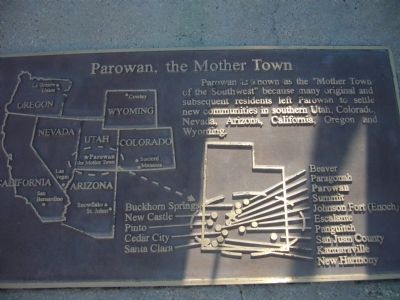 Photographed By Bill Kirchner, August 29, 2012
3. Parowan, the Mother Town
Parowan is known as the "Mother Town of the Southwest" because many original and subsequent residents left Parowan to settle new communities in southern Utah, Colorado, Nevada, Arizona, California, Oregon and Wyoming. 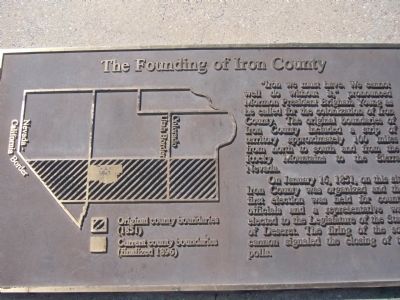 Photographed By Bill Kirchner, August 29, 2012
4. The Founding of Iron County
"Iron we must have. We cannot well do without it," pronounced Mormon President Brigham Young as he called for the colonization of Iron County. The original boundaries of Iron County included a strip of territory approximately 100 miles from north to south and from the Rocky Mountains to the Sierra Nevada.
On January 16, 1851, on this site Iron County was organized and the first election was held for county officials and representative was elected to Legislature of the State of Deseret. The firing of the sow cannon signaled the closing of the polls.
Credits. This page was last revised on June 16, 2016. It was originally submitted on September 17, 2012, by Bill Kirchner of Tucson, Arizona. This page has been viewed 452 times since then and 17 times this year. Photos:   1, 2, 3, 4. submitted on September 17, 2012, by Bill Kirchner of Tucson, Arizona. • Syd Whittle was the editor who published this page.
Share this page.