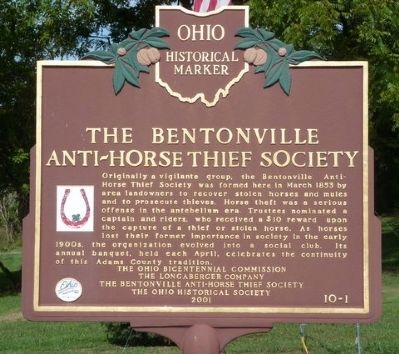 Originally a vigilante group, the Anti-Horse Thief Society was formed here in March 1853 by area landowners to recover stolen horses and prosecute the thieves. Horse theft was a serious offense in the antebellum era. Trustees nominated a captain and riders who received a $10 reward upon the capture of a thief or a stolen horse. As horses lost their importance in society in the early 1900's, the organization evolved into a social club. It's annual banquet, held each April, celebrates the continuity of this Adam's County tradition.

Topics and series. This historical marker is listed in these topic lists: Animals • Fraternal or Sororal Organizations. In addition, it is included in the Ohio Historical Society / The Ohio History Connection series list.

Editor’s want-list for this marker. Wide shot of this marker showing its surroundings • Can you help?
Share This Page.