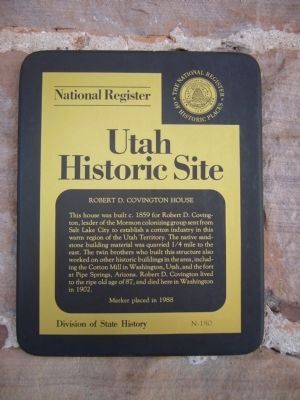 This house was built c. 1859 for Robert D. Covington, leader of the Mormon colonizing group sent from Salt Lake City to establish a cotton industry in this warm region of the Utah Territory. The native sandstone building material was quarried 1/4 mile to the east. The twin brothers who built this structure also worked on other historic buildings in the area, including the Cotton Mill in Washington, Utah and the fort at Pipe Springs, Arizona. Robert D. Covington lived to the ripe old age of 87, and died here in Washington in 1902.

Topics. This historical marker is listed in these topic lists: Notable Buildings • Settlements & Settlers. A significant historical year for this entry is 1859.

Location. 37° 8.049′ N, 113° 30.406′ W. Marker is in Washington, Utah, in Washington County. Marker can be reached from the intersection of East 200 North and North 200 East, on the right when traveling west. Marker is mounted on the wall to the right of the entrance door. Touch for map. Marker is 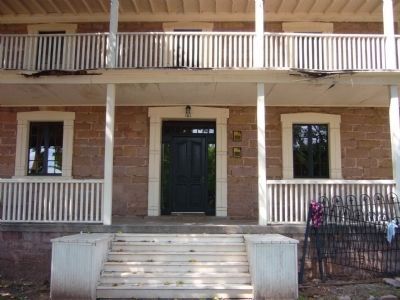 Photographed By Bill Kirchner
2. Covington Mansion
This marker is the lower marker visible to the right of the entrance door.

Click or scan to see
this page online
at or near this postal address: 181 East 200 North, Washington UT 84780, United States of America. Touch for directions. 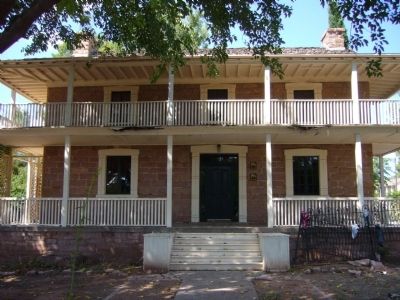