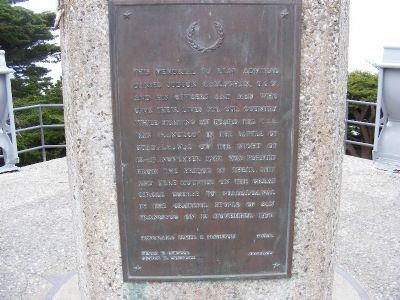 [Main Marker - Mounted on base of the flag pole.]
This memorial to Rear Admiral Daniel Judson Callaghan, U.S.N. and his officers and men who gave their lives for our country, while fighting on board the USS San Francisco in the battle of Guadalcanal on the night of 12-15 November 1942, was formed from the bridge of their ship and were mounted on the great circle course to Guadalcanal by the grateful people of San Francisco on 12 November 1950.

[Second Marker:]
On 12 & 13 November 1942 in the most savage Naval engagement at close quarters in history the United States Navy decisively turned back the enemy at Guadalcanal.
In memory of
Admiral Daniel J. Callaghan
and men of the U.S.S. San Francisco
who there gave their lives
for their country and for freedom.

Erected 1950 by The People of San Francisco.

Topics. This historical marker is listed in these topic lists: War, World II • Waterways & Vessels. A significant historical date for this entry is November 12, 1942. 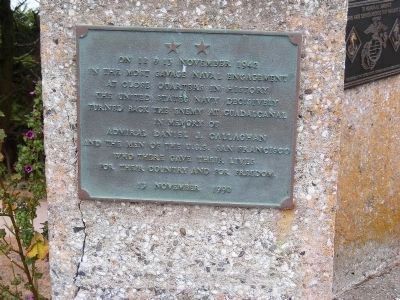 Photographed By Don Morfe, July 7, 2009
2. This Memorial to Rear Admiral Daniel J. Callaghan Marker
This marker is mounted on the Memorial wall at the far left.

Click or scan to see
this page online
122° 30.666′ W. Marker is in San Francisco, California, in San Francisco City and County. Marker can be reached from El Camino Del Mar north of Sea Rock Drive, on the left when traveling north. The marker is located on the grounds of Fort Miley, a unit of the Golden Gate National Recreation Area-Lands End. Touch for map. Marker is in this post office area: San Francisco CA 94121, United States of America. Touch for directions. 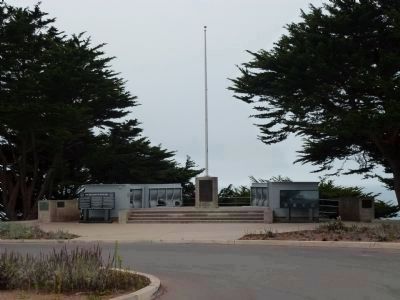 Photographed By Grace C. Miller
3. The USS San Francisco Memorial
For extraordinary heroism and conspicuous intrepidity above and beyond the call of duty during action against enemy Japanese forces off Savo Island on the night of 12-13 November 1942. Although out-balanced in strength and numbers by a desperate and determined enemy, Rear Adm. Callaghan, with ingenious tactical skill and superb coordination of the units under his command, led his forces into battle against tremendous odds, thereby contributing decisively to the rout of a powerful invasion fleet, and to the consequent frustration of a formidable Japanese offensive. While faithfully directing close-range operations in the face of furious bombardment by superior enemy fire power, he was killed on the bridge of his flagship. His courageous initiative, inspiring leadership, and judicious foresight in a crisis of grave responsibility were in keeping with the finest traditions of the U.S. Naval Service. He gallantly gave his life in the defense of his country.
— Submitted March 1, 2013, by Don Morfe of Baltimore, Maryland.
Credits. This page was last revised on November 7, 2019. It was originally submitted on September 29, 2012, by Don Morfe of Baltimore, Maryland. This page has been viewed 695 times since then and 47 times this year. Photos:   1, 2. submitted on September 29, 2012, by Don Morfe of Baltimore, Maryland.   3. submitted on October 8, 2012, by Richard E. Miller of Oxon Hill, Maryland. • Syd Whittle was the editor who published this page.
Share this page.