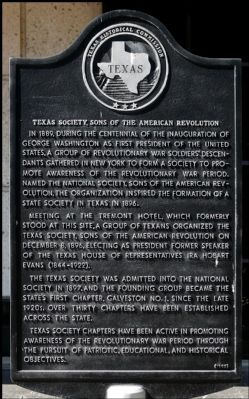 In 1889, during the Centennial of the inauguration of George Washington as first President of the United States, a group of Revolutionary War soldiers' descendants gathered in New York to form a society to promote awareness of the Revolutionary War period. Named the National Society, Sons of the American Revolution, the organization inspired the formation of a state society in Texas in 1896.

Meeting at the Tremont hotel, which formerly stood at this site, a group of Texans organized the Texas Society, Sons of the American Revolution on December 8, 1896, electing as president former speaker of the Texas House of Representatives Ira Hobart Evans (1844-1922).

The Texas society was admitted into the national society in 1897, and the founding group became the state's first chapter, Galveston No. 1. Since the late 1920s, over thirty chapters have been established across the state.

Texas society chapters have been active in promoting awareness of the Revolutionary War period through the pursuit of patriotic, educational, and historical objectives. 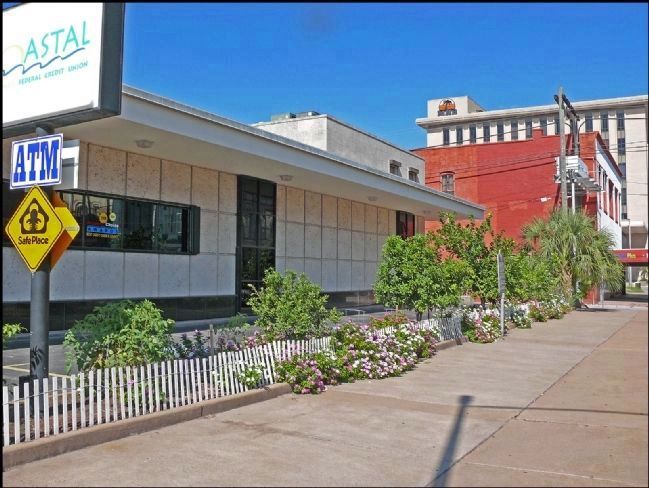 Photographed By Jim Evans, October 22, 2012
2. Texas Society, Sons of the American Revolution Marker in the Distance
Marker can be seen just below center and 1/5th of the distance from the right edge of the picture.

Topics and series. This historical marker is listed in these topic lists: Fraternal or Sororal Organizations • War, US Revolutionary. In addition, it is included in the Sons of the American Revolution series list. A significant historical month for this entry is December 1766.