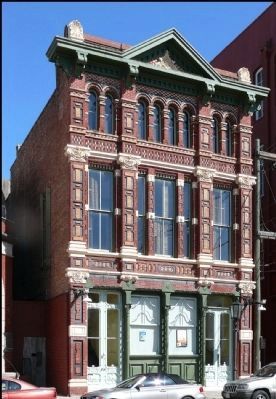 Photographed By Jim Evans, October 22, 2012
1. Trueheart-Adriance Building
Inscription.
Trueheart-Adriance Building. . Designed in neo-renaissance, high Victorian style by Nicholas J. Clayton, noted architect, for H.M. Trueheart and Co., first chartered realty firm in Texas, founded by John O. Trueheart in 1857., H.M. Trueheart joined his father in 1866, admitted John Adriance as a partner in 1871, and built this structure in 1882., After H.M. Trueheart retired in 1906, the firm continued through 1953 as John Adriance and Sons. ,
Recorded Texas Historic Landmark-1973 , Restored by the Junior League of Galveston. . This historical marker was erected in 1973 by Texas Historical Survey Committee. It is in Galveston in Galveston County Texas

After H.M. Trueheart retired in 1906, the firm continued through 1953 as John Adriance & Sons.

Topics. This historical marker is listed in this topic list: Notable Buildings. A significant historical year for this entry is 1857.

Location. Marker has been reported missing. It was located near 29° 18.427′ N, 94° 47.579′ W. Marker was in Galveston, Texas, in Galveston County. Marker could be reached from 22nd Street north of Avenue C, on the right when traveling north. Touch for map.

Click or scan to see
this page online
Marker was at or near this postal address: 212 22nd Street, Galveston TX 77550, United States of America. Touch for directions.