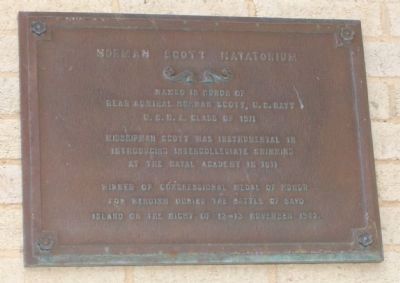 By Richard E. Miller, June 08
1. Norman Scott Natatorium Marker
Inscription.
Norman Scott Natatorium. Named in honor of Rear Admiral Norman Scott, U.S. Navy.
Midshipman Scott was instrumental in introducing intercollegiate swimming at the Naval Academy in 1911.. Winner of Congressional Medal of Honor for heroism during the Battle of Savo Island [sic] on the night of 12-13 November 1942.. . This historical marker is in Annapolis in Anne Arundel County Maryland

Midshipman Scott was instrumental in
introducing intercollegiate swimming
at the Naval Academy in 1911.

Winner of Congressional Medal of Honor
for heroism during the Battle of Savo
Island [sic] on the night of 12-13 November 1942.

Topics and series. This historical marker is listed in these topic lists: Heroes • War, World II • Waterways & Vessels. In addition, it is included in the Medal of Honor Recipients series list. A significant historical year for this entry is 1911.

Location. 38° 58.92′ N, 76° 28.869′ W. Marker is in Annapolis, Maryland, in Anne Arundel County. Marker is on Cooper Road just south of Holloway Road. Marker is on the east face of the natatorium (swimming pool building) at the north east side of Bancroft Hall and adjacent to Luce Hall aboard the U.S. Naval Academy. Vehicle access and parking may be restricted in the area, but the marker should be accessible to pedestrians. Visitors will need to show a picture identification to enter the Academy. Touch for map. Marker is in this post office area: Annapolis MD 21402, United States of America. Touch for directions. 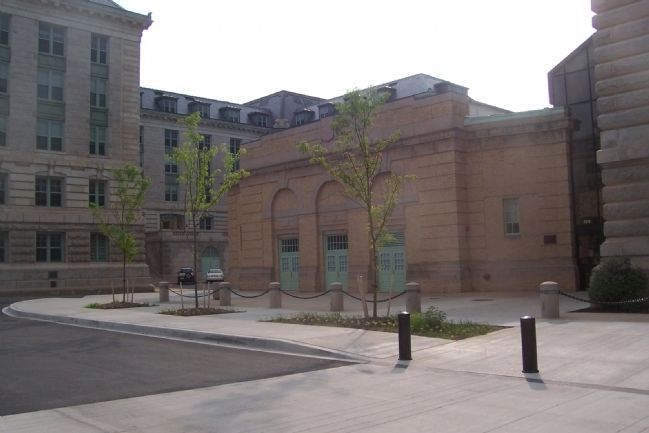 By Richard E. Miller, June 08
2. Norman Scott Natatorium, situated between Bancroft Hall and Luce Hall at the U.S. Naval Academy
(The marker is visible on the wall, right center.)

Additional commentary.
1. RAdm. Norman Scott
Apparently, this marker was placed on the Natatorium shortly after Scott's death in what was then (1942) referred to as the "Third Battle of Savo Island" and later as the "Naval Battle of Guadalcanal." The admiral's Medal of Honor citation 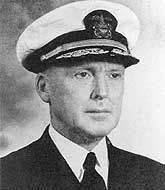 U.S. Naval Historical Center
3. RADM Norman Scott
recognized his heroism during that engagement (12-13 November 1942) as well as during the action of 11-12 October 1942 in the same vicinity that was later known as the "Battle of Cape Esperance". It reads as follows:

"For extraordinary heroism and conspicuous intrepidity above and beyond the call of duty during action against enemy Japanese forces off Savo Island on the night of 11-12 October and again on the night of 12-13 November 1942. In the earlier action, intercepting a Japanese Task Force intent upon storming our island positions and landing reinforcements at Guadalcanal, Rear Adm. Scott, with courageous skill and superb coordination of the units under his command, destroyed 8 hostile vessels and put the others to flight. Again challenged, a month later, by the return of a stubborn and persistent foe, he led his force into a desperate battle against tremendous odds, directing close-range operations against the invading enemy until he himself was killed in the furious bombardment by their superior firepower. On each of these occasions his dauntless initiative, inspiring leadership and judicious foresight in a crisis of grave responsibility contributed decisively to the rout of a powerful invasion fleet and to the consequent frustration of a formidable Japanese offensive. He gallantly gave his life in the service of his country."
— Submitted November 22, 2008, by Richard E. Miller of Oxon Hill, Maryland.