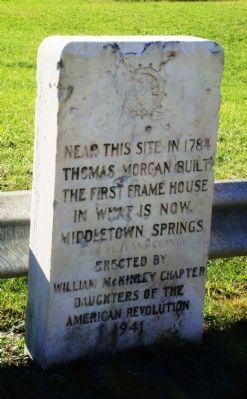 Near this site in 1784 Thomas Morgan built the first frame house in what is now Middletown Springs.

Erected 1941 by Daughters of the American Revolution, William McKinley Chapter.

Topics and series. This historical marker is listed in these topic lists: Notable Buildings • Settlements & Settlers. In addition, it is included in the Daughters of the American Revolution (DAR) series list. A significant historical year for this entry is 1784.

Other nearby markers. At least 8 other markers are within 6 miles of this marker, measured as the crow flies. A. W. Gray & Sons (approx. 0.6 miles away); Middletown Springs War Memorial (approx. 0.9 miles away); Birthplace of Oliver Cowdery (approx. 3.2 miles away); Ira Town Hall c.1800 (approx. 5 miles away); Poultney Civil War Monument (approx. 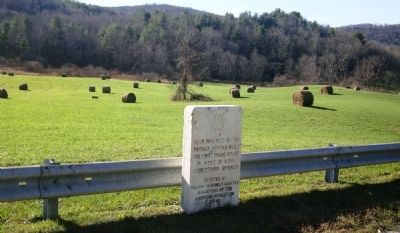