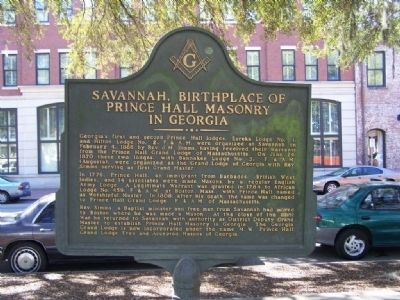 Georgia's first and second Prince Hall lodges, Eureka Lodge No. 1, and Hilton Lodge No. 2, F. & A.M. were organized at Savannah on February 4, 1866 by Rev. J. M. Simms, having received their warrants from the Prince Hall Grand Lodge of Massachusetts. On June 24, 1870 these two lodges, with Bannaker Lodge No. 3, F. & A.M. (Augusta), were organized as the Grand Lodge of Georgia with Rev. Simms serving as first Grand Master.

In 1776, Prince Hall, an immigrant from Barbados, British West Indies, and 14 associates were made Masons by a regular English Army Lodge. A Legitimate Warrant was granted in 1784 to African Lodge No. 459, F. & A.M. at Boston, Mass., with Prince Hall named as Worshipful Master. In 1808, after his death, the name was changed to Prince Hall Grand Lodge, F. & A.M. of Massachusetts.

Rev. Simms, a Baptist minister and free man from Savannah had moved to Boston where he was made a Mason. At the close of the Civil War he returned to Savannah with authority as District Deputy Grand Master to establish Prince Hall Masonry in Georgia. The Georgia Grand Lodge is now incorporated under the name M. W. Prince Hall Grand 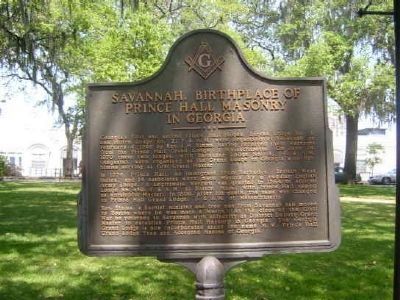 Click or scan to see
this page online
Lodge Free and Accepted Masons of Georgia.

Topics. This historical marker is listed in these topic lists: African Americans • Fraternal or Sororal Organizations. A significant historical month for this entry is February 1812.

Location. 32° 4.8′ N, 81° 5.242′ W. Marker is in Savannah, Georgia, in Chatham County. Marker is on East Bay Street, on the right when traveling west. Located along Bay Street, between Habersham and Lincoln Streets, in the park. Touch for map. Marker is in this post office area: Savannah GA 31401, United States of America. Touch for directions.

Additional commentary.
1. For a brief History:
On March 6, 1775, Prince Hall and 14 men of color were made masons in Lodge 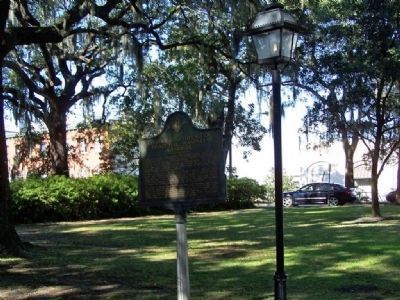 Photographed By Mike Stroud, 2008
3. Savannah, Birthplace of Prince Hall Masonry in Georgia Marker
Located in Savannah's Emmet Park
#441 of the Irish Registry attached to the 38th British Foot Infantry at Castle William Island in Boston Harbor, Massachusetts. It marked the first time that Black men were made masons in America. About a year later, since the conflict between England and America had commenced, the British Foot Infantry left Boston, along with its lodge, leaving Prince Hall and his associates without a lodge. Before the lodge left, Worshipful Master Bait, gave them a "permit" to meet as a lodge and bury their dead in manner and form. This permit, however, did not allow them to do any "Masonic work" or to take in any new members. Under it, African Lodge was organized on July 3, 1776, with Prince Hall as the Worshipful Master. It wasn't long before this lodge received an addtional "permit" from Provincial Grand Master John Rowe to walk in procession on St. John's Day.

On March 2, 1784, African Lodge #1 petitioned the Grand Lodge of England, the Premier or Mother Grand Lodge of the world, for a warrant (or charter), to organize a regular Masonic lodge, with all the rights and privileges thereunto prescribed. The Grand Lodge of England issued a charter on September 29, 1784 to African Lodge #459, the first lodge of Blacks in America. The time is now 1866, Brother James M. Simms already having been made a Mason, knew that in Savannah, there were a number of brethren of a receptive mind who craved the light of Masonry. Several of those brethren were free men and under the usage of Masonry and were qualified to receive the secrets of the order.

Even though the smell of gunpowder and the echoing of cannons of the civil war; the fight for freedom and the great struggle of the North and the South was ongoing, the formation of a Masonic Lodge was on the minds of men of color for many years. At that time colored men were not allowed to have any gatherings what so ever except for religious purposes. Immediately after President Lincoln issued the Emancipation Proclamation the brethren who were interested in the formation of a Lodge started to hold meetings. Several attempts were made to establish a Lodge but it was very difficult to secure the required number of Masons to assist in the work. The work was, therefore delayed. Finally a dispensation was granted by the Prince Hall Grand Lodge of Massachusetts on February 4 A.D. 1866, A.L. 5866 and Eureka No. 11 A.F. & A. M was organized. The first Lodge room was located in the building which today occupies the site of the Chatham Bank and Trust Company located west of Johnson Square.

Bro. James M. Simms was appointed District Deputy Grand Master for the area, which covered Georgia, Florida, and Alabama. The Prince Hall Grand Lodge of Massachusetts granted the Charter for Eureka No. 11 A. F. & A. M. on 24 June 1866. At its exception, the Lodge grew to such a large number that some of the brethren were given their demits so that in September of the same year John T. Hilton Lodge No.13 in avannah could be formed being granted a dispensation by the Prince Hall Grand Lodge of Massachusetts. Bro. James Jackson helped to organize Banneker Lodge No. 38 in Augusta, Georgia. The Grand Lodge of Pennsylvania granted the dispensation.