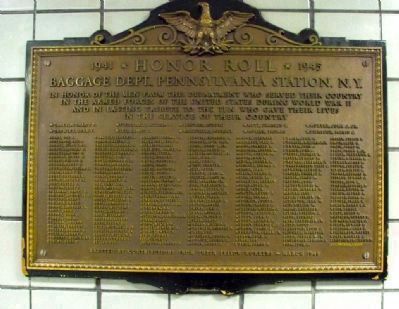 In honor of the men from this department who served their country in the Armed Forces of the United States during World War II and in lasting tribute to the ten who gave their lives in the service of their country.

Erected 1948 by Fellow workers of the Penn Station Baggage Handlers. 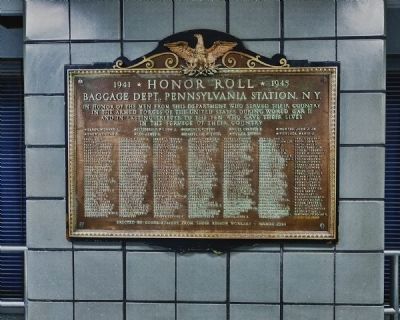 More about this marker. Plaque has been relocated from the outside platforms of the original Penn Station to a wall next to the Amtrak baggage window on the main concourse level of the new (late 1960s) Penn Station (behind the Amtrak Police booth). A photo showing a wider view of the plaque is not available due to security restrictions.

Regarding 1941 · Honor Roll · 1945. The sheer number of veterans, just from this station's baggage handling department, is a small indication of the effort the United States needed to run its national rail system in the mid-twentieth century.

Also see . . .  40 Years After Wreckage, Bits of Old Penn Station; Ghosts of a New York Marvel Survive. The marker is noted in this article by Glenn Collins, originally published by the New York Times on October 28, 2003. (Submitted on March 12, 2008, by Kevin W. of Stafford, Virginia.)

Additional comments.
1. The Original Penn Station
The original Pennsylvania Station, completed in 1910, was a masterpiece of Beaux-Arts style and one 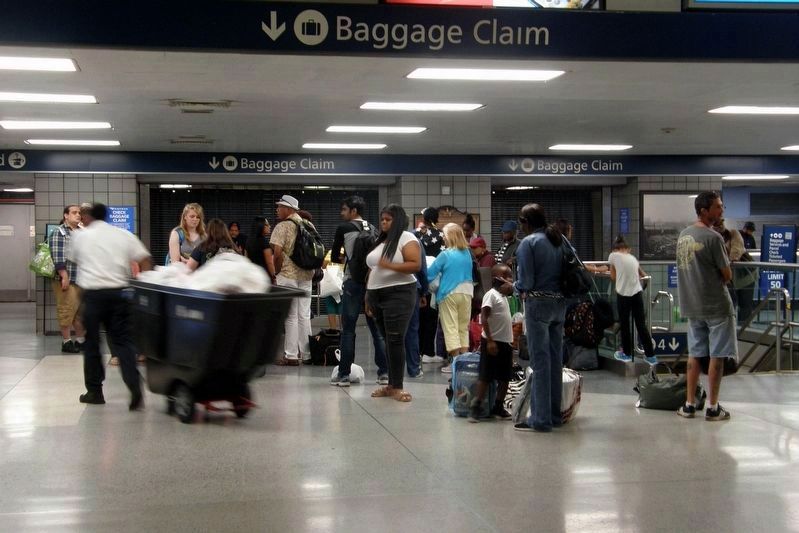 By Larry Gertner, August 2017
3. 1941 · Honor Roll · 1945 Marker at the baggage claim.
The marker is directly behind the woman in blue.
of New York City's architectural jewels. The above-ground portion of the original structure was demolished in 1964 and replaced by the present Pennsylvania Plaza complex, including the fourth and current Madison Square Garden. Many historians believe that failure to prevent Penn Station's demolition launched a nationwide effort to preserve other historic buildings through stronger local and state laws.