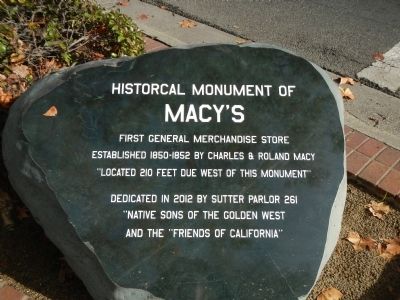 By Barry Swackhamer, November 18, 2012
1. Historical Monument of Macy’s Marker
Inscription.
Historical Monument of Macy’s. . First general merchandise store established 1850-1852 by Charles and Roland Macy . “Located 210 feet due west of this monument” . This historical marker was erected in 2012 by Native Sons of the Golden West, Sutter Parlor 261 & Friends of California. It is in Marysville in Yuba County California

Erected 2012 by Native Sons of the Golden West, Sutter Parlor 261 & Friends of California.

Topics and series. This historical marker is listed in this topic list: Industry & Commerce. In addition, it is included in the Native Sons/Daughters of the Golden West series list.

Location. 39° 8.164′ N, 121° 35.317′ W. Marker is in Marysville, California, in Yuba County. Marker is at the intersection of D Street and 1st Street, on the right when traveling south on D Street. Touch for map. Marker is at or near this postal address: 100 D Street, Marysville CA 95901, United States of America. Touch for directions. 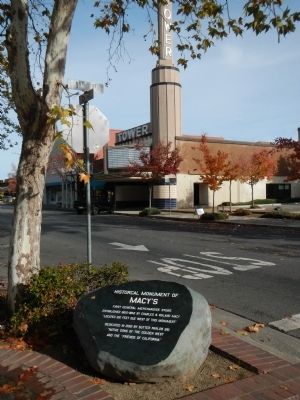 By Barry Swackhamer, November 18, 2012
2. Historical Monument of Macy’s Marker
(within shouting distance of this marker); Mission Building (about 300 feet away, measured in a direct line); Beckwourth Trail – Marysville (approx. 0.2 miles away); José Manuel Ramírez Rosales (approx. 0.3 miles away). Touch for a list and map of all markers in Marysville.