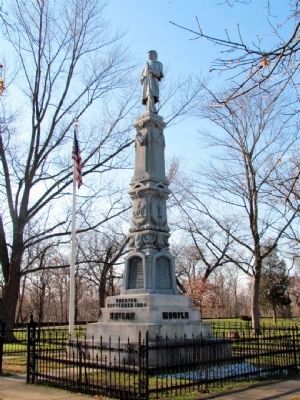 (Facing East)
Erected by the citizens of Penn Township, St. Joseph County, Indiana, to commemorate the bravery and patriotism of her soldiers and sailors in the war for the preservation of national unity 1861-1865.

Sleep on ye noble patriot braves,
Wherever lie your honored graves,
A nation free and proud and great,
Your memories perpetuate.

"The Union must, and shall shall be preserved."

Location. 41° 39.952′ N, 86° 11.162′ W. Marker is in Mishawaka, Indiana, in St. Joseph County. Memorial is at the intersection of W. Mishawaka Ave and Charlotte Ave, on the left when traveling west on W. Mishawaka Ave. Marker is located in the east part of Battell Park. Touch for map. Marker is at or near this postal address: 400 W Mishawaka Ave, Mishawaka IN 46545, United States of America. Touch for directions. 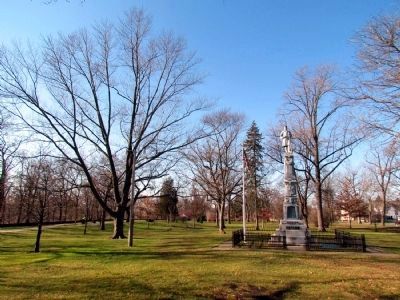