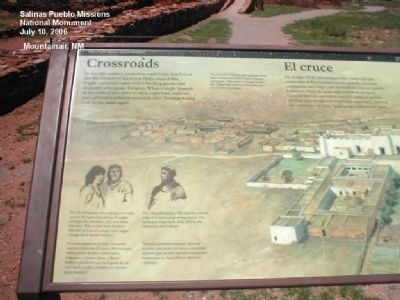 In English:
Crossroads
In the 17th century, an ancient trade route that linked the Rio Grande to the Great Plains shared this fragile mountain valley with a bustling pueblo full of people who spoke Tompiro. When a single Spanish priest walked into town in 1622, a spiritual, material, and cultural revolution started in Abo. Nothing would ever be the same again.

Graphic Illustration:
In English:
For the Tompiros, the well-known trail across Abo pass had always brought tradegoods, travelers, and new ideas this way. Who could have foretold that the arrival of a single friar might change their world forever?

For a Spanish priest, Abo was the remote edge of a vast and growing 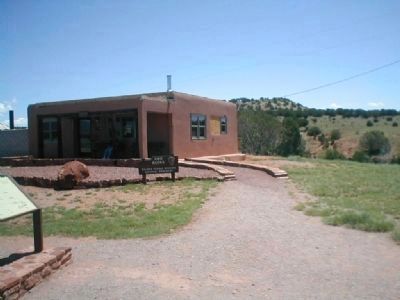 Click or scan to see
this page online
empire that included outposts in Asia, Africa, the Americas, and Europe.

Topics. This historical marker is listed in these topic lists: Churches & Religion • Native Americans. A significant historical year for this entry is 1622. 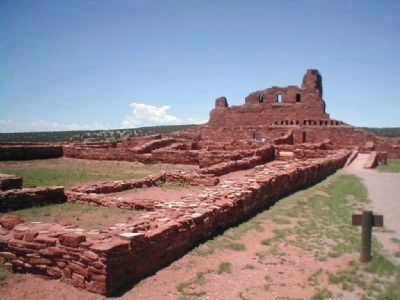 Photographed By Don Morfe, July 10, 2006
3. Abo Ruins
Quarai, and Gran Quivira with elevations ranging from 6100 to 6600 above sea level. Vegetation is predominantly pinyon-juniper woodlands and associated shrubland, including cacti. Good riparian conditions exist at Abó and Quarai.
Salinas Pueblo Missions is positioned within the Estancia Basin, east of the Manzano Mountains. In Pleistocene time the Estancia Basin held a lake. Surrounding the margins of the valley beaches, bars, and spits are distinguishable. Eventually the lake dried up and the American Indians associated with the pueblos of Salinas cultivated staple foods such as corn, beans, and squash, on the fine loamy lake deposits.
Salinas Pueblo Missions was set aside because of the importance of the cultural resources however, there is a major connecting link to the natural resources. The link is the importance of man’s adjustment to a marginal land and the man-land relationship during the past 1,000+ years of occupation.
Salinas Pueblo Missions is situated in the foothills of the Manzano Mountains. The word Manzano is derived from the word "manzanas" which is Spanish for apples. It is said that the small Hispanic village and the surrounding mountains take their name for the ancient orchards here. The orchards were believed to have been planted by the Franciscan priests in the early 17th century, however, the trees have been dated no earlier than the 1800s.
Elevations 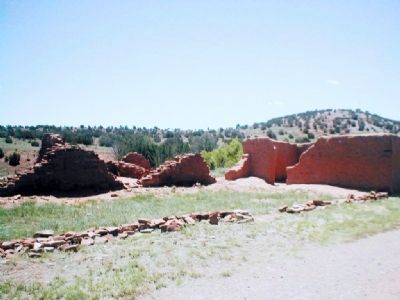 Photographed By Don Morfe, July 10, 2006
4. Abo Ruins
in the Manzano Mountain range form 6,000 feet in the foothills to 10,098 feet on Manzano Peak. Vegetation consists of pinyon-juniper woodlands in the lower elevations to mixed conifer forests in the high country. The terrain, cut with canyons and rocky outcrops, is fairly steep and rugged.
The approximately 112,000 acres, comprising the Manzano Mountains are administered by the Mountainair Ranger District of the Cibola National Forest. The Manzanos are a long, narrow range trending north and south. The area slopes gently up from the Estancia Valley in the east to about 8,000 feet elevation and then rises abruptly to the ridgeline. The west face drops sharply into the uplands of the Rio Grande Valley.
Source: The National Park Service website 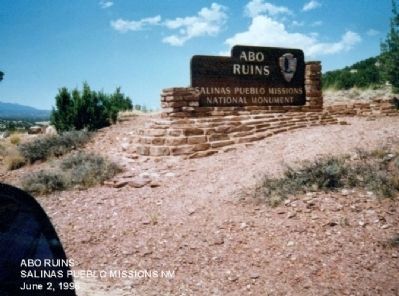 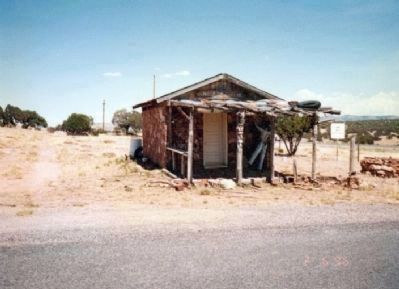 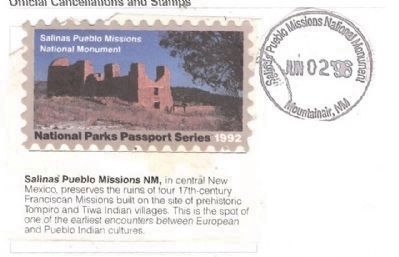 Photographed By Don Morfe, June 2, 1998
7. National Park Cancellation Stamp-Salinas Pueblo Missions National Monument
In central New Mexico, preserves the ruins of four 17th century Franciscan Missions built on the site of prehistoric Tompiro and Tiwa Indian villages. This is the spot of one of the earliest encounters between European and Pueblo Indian cultures.
Credits. This page was last revised on August 12, 2021. It was originally submitted on December 23, 2012, by Don Morfe of Baltimore, Maryland. This page has been viewed 587 times since then and 46 times this year. Photos:   1, 2, 3, 4, 5, 6, 7. submitted on December 23, 2012, by Don Morfe of Baltimore, Maryland. • Syd Whittle was the editor who published this page.