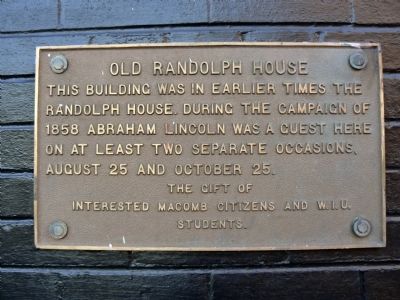 By Deborah H. Lutz, October 18, 2012
1. Old Randolph House Marker
Inscription.
Old Randolph House. . This building was in earlier times the Randolph House. During the campaign of 1858 Abraham Lincoln was a guest here on at least two separate occasions, August 25 and October 25. . This historical marker was erected by Interested Macomb Citizens and W.I.U. Students. It is in Macomb in McDonough County Illinois

This building was in earlier times the Randolph House. During the campaign of 1858 Abraham Lincoln was a guest here on at least two separate occasions, August 25 and October 25.

Topics and series. This historical marker is listed in this topic list: Notable Buildings. In addition, it is included in the Former U.S. Presidents: #16 Abraham Lincoln series list. A significant historical month for this entry is October 1858.

Location. 40° 27.491′ N, 90° 40.208′ W. Marker is in Macomb, Illinois, in McDonough County. Marker is at the intersection of South Randolph Street and South Side Square, on the left when traveling south on South Randolph Street. The marker is on the left front of the building by the alley. Touch for map. Marker is at or near this postal address: 5 East Side Square, Macomb IL 61455, United States of America. Touch for directions. 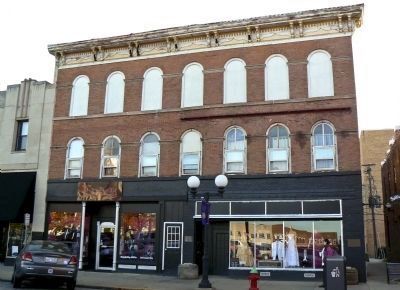 By Deborah H. Lutz, October 18, 2012
2. The Randolph House
The maker is visible on the right side of the building by the alley

Regarding Old Randolph House. Built in 1856 the Randolph House offered elegance that was almost unheard of in western Illinois. Bellboys carried luggage and there was a carriage shuttle to the train depot. In 1936 the northern part of the building was demolished, only one-half of the original structure remains. 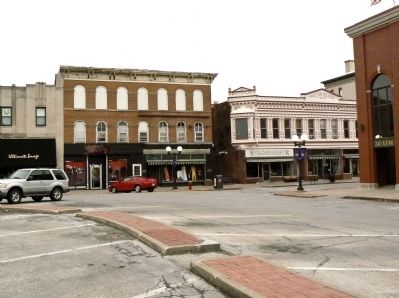 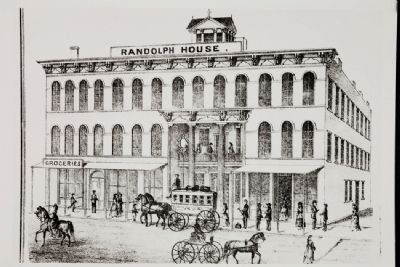 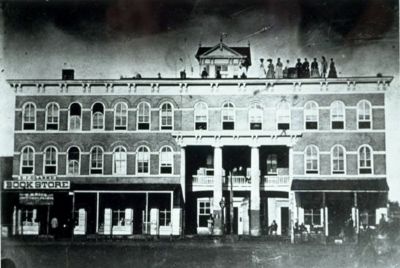