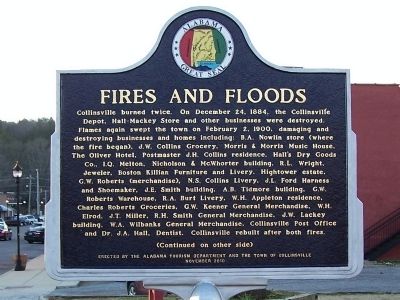 (Reverse):
Location was a major factor in mid-nineteenth century growth of Collinsville. The plush valley, once home of the Cherokee, was situated on a well established trade route from Rome to Gunter’s Landing and from Tuscaloosa to Ross’s Landing. The Town suffered as it was inundated 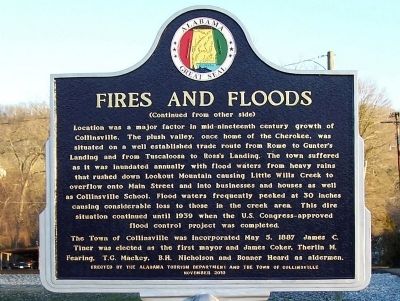 By David J Gaines, January 4, 2013
2. Fires and Floods Marker
annually with flood waters from heavy rains that rushed down Lookout Mountain causing Little Wills Creek to overflow onto Main Street and into businesses and houses as well as Collinsville School. Flood waters frequently peeked at 30 inches causing considerable loss to those in the creek area. This dire situation continued until 1939 when the U.S. Congress-approved flood control project was completed.

The Town of Collinsville was incorporated May 5, 1887. James C. Tiner was elected as the first mayor and James Coker, Therlin M. Fearing, T.G. Mackey, B.H. Nicholson and Bonner Heard as alderman.

Erected 2010 by Alabama Tourism Department and the Town of Collinsville.

Other nearby markers. At least 8 other markers are within 9 miles of this marker, measured as the crow flies. Collinsville Historic District (about 700 feet away, measured in a direct line); Indian Mound, Inn, and Church Site (approx. 0.2 miles away); Sand Rock 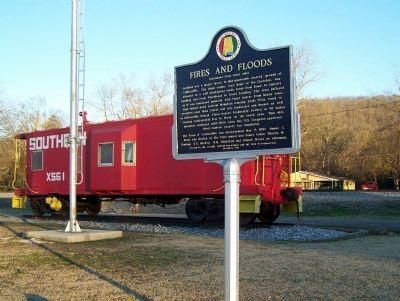