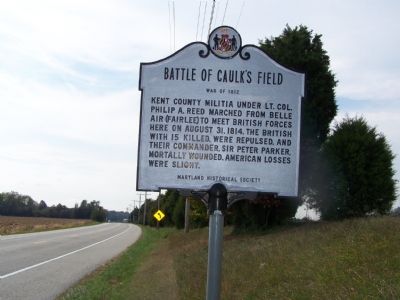 By William Pfingsten, October 18, 2007
1. Battle of Caulk's Field Marker
Inscription.
Battle of Caulk’s Field. War of 18 12. Kent County Militia under Lt. Col. Philip A. Reed marched from Belle Air (Fairlee) to meet British Forces here on August 31, 1814. The British with 15 killed, were repulsed and their commander, Sir Peter Parker, mortally wounded. American losses were slight. . This historical marker was erected by Maryland Historical Society. It is in Fairlee in Kent County Maryland 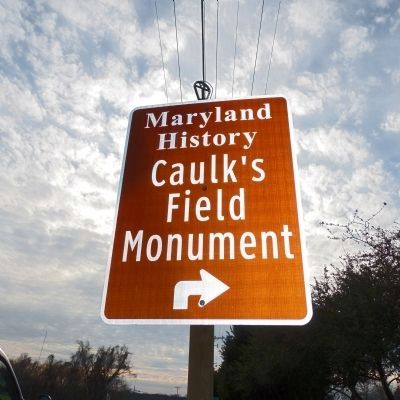 1. Battle of Caulk’s Field Marker
The wording on the marker appears incorrect. In conversation with local historian Stanley Quick, I realised that what is stated on the monument is a misreading of Lt. Col. Philip Reed's after-battle report, which was written from Belle Air (Fairlee), and gave the impression he and his troops had marched from that location to meet the British. In fact, the militiamen were camped nearer the beach, at Georgetown Crossroads, and made a retrograde march a few hundred yards to meet the British at Caulk's Field.
— Submitted August 24, 2009, by Christopher T. George of Baltimore, Maryland.