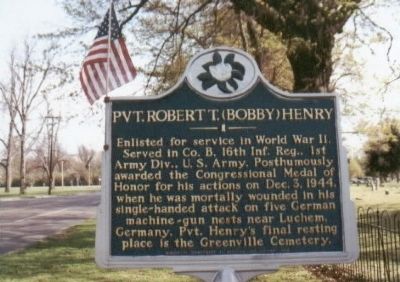 Enlisted for service in World War II. Served in Co. B. 16th Inf. Reg., 1st Army Div., U.S. Army. Posthumously awarded the Congressional Medal of Honor for his actions on Dec. 3, 1944, when he was mortally wounded in his single-handed attack on five German machine-gun nests near Luchem, Germany. Pvt. Henry’s final resting place is the Greenville Cemetery.

Topics and series. This memorial is listed in this topic list: War, World II. In addition, it is included in the Medal of Honor Recipients, and the Mississippi State Historical Marker Program series lists.

Other nearby markers. At least 8 other markers are within walking distance of this marker. Gamwyn Park (about 500 feet away, measured in a direct line); Greenville (approx. half a mile away); Holt Collier (approx. 0.6 miles away); New Jerusalem M.B. Church (approx. ¾ mile away); The King's Daughters Hospital (approx. 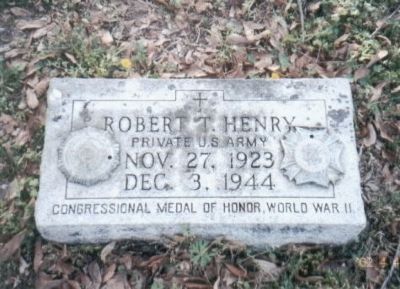 Regarding Pvt. Robert T. (Bobby) Henry. MEDAL OF HONOR CITATION: *HENRY, ROBERT T. (KILLED IN ACTION)
Rank and organization: Private, U.S. Army, 16th Infantry, 1st Infantry Division. Place and date: Luchem, Germany, 3 December 1944. Entered service at: Greenville, Miss. Birth: Greenville, Miss. G.O. No.: 45, 12 June 1945. Citation: Near Luchem, Germany, he volunteered to attempt the destruction of a nest of 5 enemy machineguns located in a bunker 150 yards to the flank which had stopped the advance of his platoon. Stripping off his pack, overshoes, helmet, and overcoat, he sprinted alone with his rifle and hand grenades across the open terrain toward the enemy emplacement. Before he had gone half the distance he was hit by a burst of machinegun fire. Dropping his rifle, he continued to stagger forward until he fell mortally wounded only 10 yards from the enemy emplacement. His single-handed attack forced the enemy to leave the machineguns. During this break in hostile fire the platoon 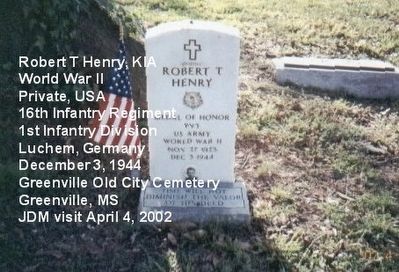 Photographed By Don Morfe, April 4, 2002
3. Pvt. Robert T. (Bobby) Henry Marker
Robert Henry's government Medal of Honor grave marker.
moved forward and overran the position. Pvt. Henry, by his gallantry and intrepidity and utter disregard for his own life, enabled his company to reach its objective, capturing this key defense and 70 German prisoners.
Credits. This page was last revised on June 16, 2016. It was originally submitted on January 21, 2013, by Don Morfe of Baltimore, Maryland. This page has been viewed 670 times since then and 16 times this year. Photos:   1, 2, 3. submitted on January 21, 2013, by Don Morfe of Baltimore, Maryland. • Craig Swain was the editor who published this page.
Share this page.