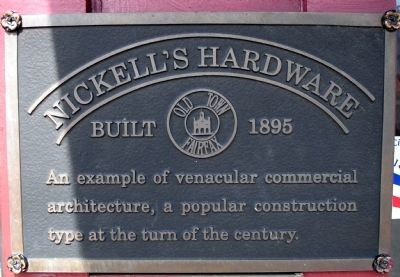 March 15, 2008
1. Nickell's Hardware Marker
Inscription.
Nickell's Hardware. Built 1895. An example of venacular commercial architecture, a popular construction type at the turn of the century. . This historical marker is in Fairfax Virginia

An example of venacular commercial architecture, a popular construction type at the turn of the century.

Topics and series. This historical marker is listed in these topic lists: Architecture • Industry & Commerce. In addition, it is included in the Virginia, Old Town Fairfax series list. 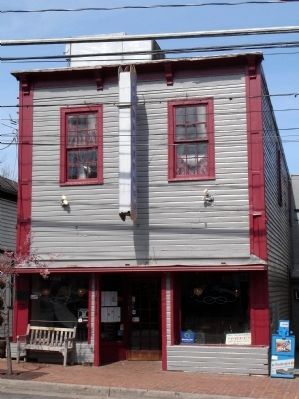 March 15, 2008
2. Nickell's Hardware Store
Marker is on the left side of the left window.
(within shouting distance of this marker); A Tribute to The Men of Fairfax County (about 300 feet away, measured in a direct line). Touch for a list and map of all markers in Fairfax.

Regarding Nickell's Hardware. This structure is currently a business in the City of Fairfax Historic District.
Credits. This page was last revised on August 10, 2020. It was originally submitted on March 16, 2008. This page has been viewed 1,640 times since then and 29 times this year. Photos:   1, 2. submitted on March 16, 2008. • Christopher Busta-Peck was the editor who published this page.
Share This Page.