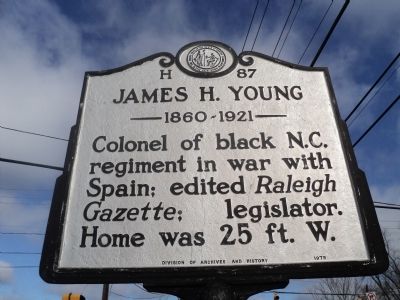 By Bill Coughlin, February 6, 2013
1. James H. Young Marker
Inscription.
James H. Young. Colonel of black N.C. regiment in war with Spain; edited Raleigh Gazette; legislator. Home was 25 ft. W. . This historical marker was erected in 1975 by Division of Archives and History. It is in Raleigh in Wake County North Carolina

Erected 1975 by Division of Archives and History. (Marker Number H-87.)

Topics and series. This historical marker is listed in this topic list: War, Spanish-American. In addition, it is included in the North Carolina Division of Archives and History series list.

Other nearby markers. At least 8 other markers are within walking distance of this marker. Tupper Memorial Baptist Church (about 600 feet away, measured in a direct line); Estey Hall (about 700 feet away); Shaw University (about 800 feet away); James H. Harris (approx. 0.2 miles away); Governor’s Palace of North Carolina 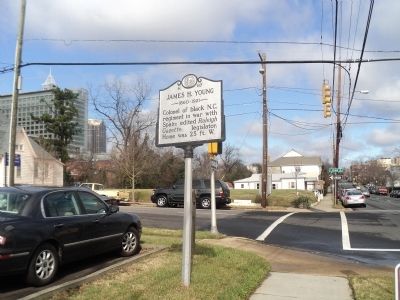