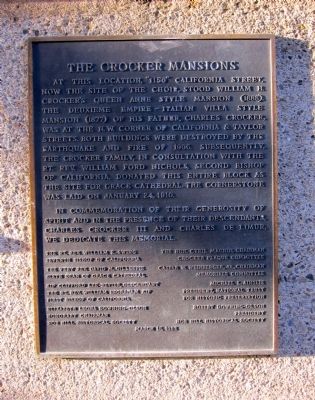 At this location, "1150" California Street, now the site of the Choir, stood William H. Crocker's Queen Anne style mansion (1888). The Deuxieme Empire-Italian Villa style mansion (1877) of his father, Charles Crocker, was at the N.W. corner of California & Taylor. Both buildings were destroyed in the earthquake and fire of 1906. Subsequently, the Crocker family, in consultation with the Rt. Rev. William Ford Nichols, second Bishop of California, donated this entire block as the site for Grace cathedral. The cornerstone was laid on January 24, 1910.

In commemoration of their generosity of spirit and in the presence of their descendants, Charles Crocker III and Charles de Limur, we dedicate this memorial. 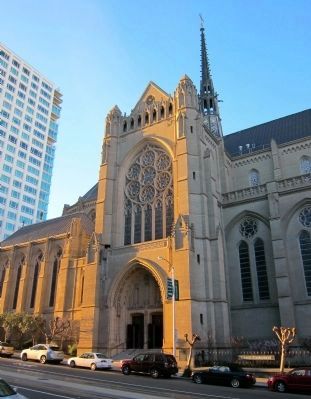 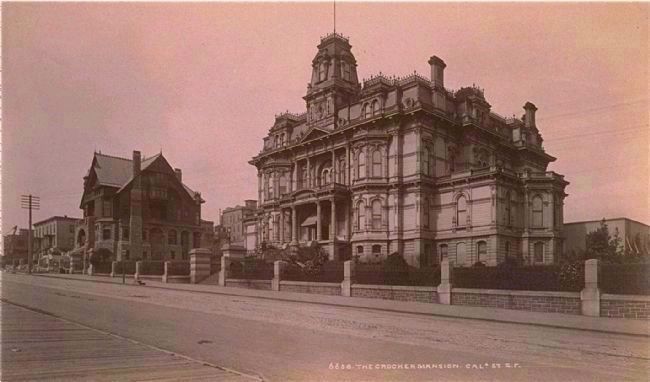 By William Henry Jackson
3. Looking West Along California Street - Charles and William Crocker Mansions
This undated photo, courtesy of the Bancroft Library, shows both Crocker Mansions, with the more (in)famous mansion owned by Charles Crocker in the foreground, and the mansion owned by his son, William, set further back. The famed "spite fence", put up by Charles Crocker, is visible in the background on the right. Crocker had the fence erected in 1877 to enclose on 3 sides the property of Nicholas Yung, who had refused to sell his property to Crocker, and the fence stood until 1904. The spite fence and the mansion itself, were seen by many as the manifestations of excessive wealth and ego.
. The Historic American Buildings Survey for the Crocker Fence (which surrounded the property, not to be confused with the "spite fence" referenced above). (Submitted on March 1, 2013.) 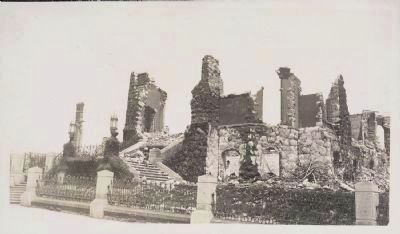 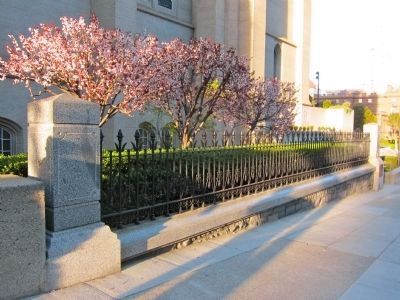