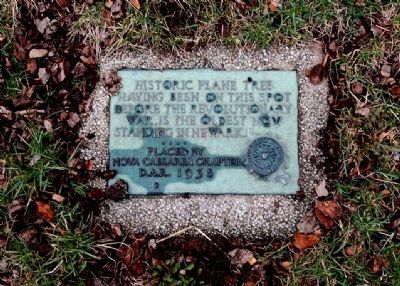 Photographed By R. C., March 15, 2008
1. Historic Plane Tree / Washington Tree Marker
Inscription.
Historic Plane Tree. .
Having been on this spot before the Revolutionary War, is the oldest now standing in Newark, Placed by Nova Caesarea Chapter D.A.R. 1938. . This historical marker was erected in 1938 by Nova Caesarea Chapter, Daughters of the American Revolution. It is in Newark in Essex County New Jersey

Having been on this spot
before the Revolutionary
War, is the oldest now
standing in Newark

Erected 1938 by Nova Caesarea Chapter, Daughters of the American Revolution.

Topics and series. This historical marker is listed in these topic lists: Colonial Era • Horticulture & Forestry. In addition, it is included in the Daughters of the American Revolution (DAR), and the Historic Trees series lists. A significant historical year for this entry is 1938. 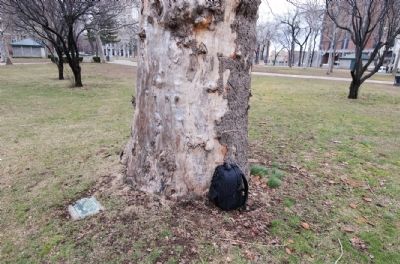 Photographed By R. C., March 15, 2008
2. Side View of Marker from Broad Street
My backpack is next to the tree to give the viewer an idea of scale. It's unlikely that two adults could get their arms around the trunk.

Regarding Historic Plane Tree. The Historic Plane Tree, or "Washington Tree" as it is commonly called is an ancient sycamore that could be as old as 300 years. Regardless, this tree was full grown when George Washington marched his troops into Newark during their retreat across New Jersey.

Sadly, this tree is near death and cannot be saved. In a few short years, the last tree in the area that was there when history was being made will be no more. 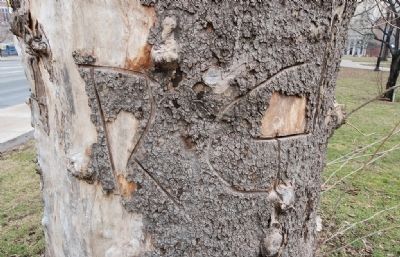 Photographed By R. C.
3. Damage to the Tree by Vandals 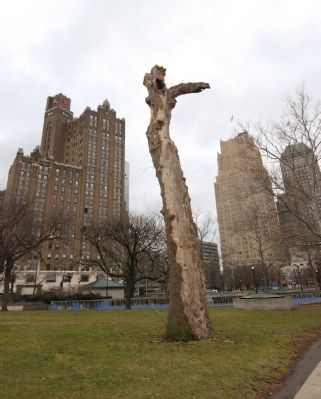