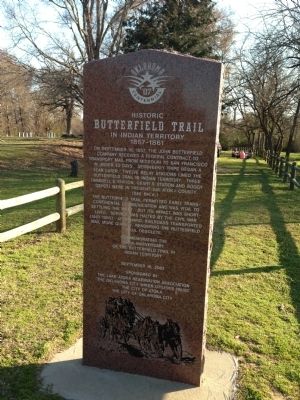 Commemorating the 150th Anniversary of the Butterfield Trail in Indian Territory 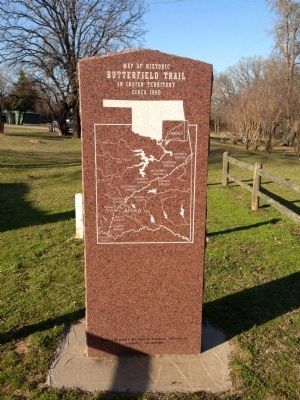 By Michael Manning, March 27, 2013
2. Map of Historic Butterfield Trail in Indian Territory circa 1860

Click or scan to see
this page online
• Settlements & Settlers. In addition, it is included in the Butterfield Overland Mail series list. A significant historical date for this entry is September 16, 1857.

Location. 34° 23.944′ N, 96° 7.005′ W. Marker is in Atoka, Oklahoma, in Atoka County. Marker can be reached from North Mississippi Avenue (U.S. 69) 0.8 miles north of West Liberty Road (U.S. 75), on the right when traveling north. Marker is located on the Butterfield Trail within the Confederate Memorial Park north of Atoka. Touch for map. Marker is in this post office area: Atoka OK 74525, United States of America. Touch for directions.