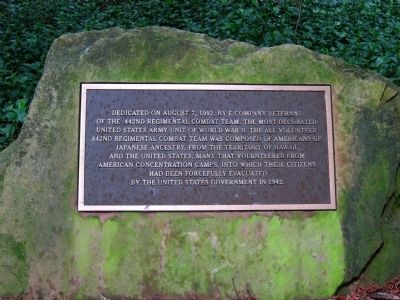 Dedicated on August 7, 1992, by E Company Veterans of the 442nd Regimental Combat Team, the most decorated United States Army Unit of World War II. The all volunteer 442nd Combat Team was composed of Americans of Japanese ancestry, from the Territory of Hawaii, and the United States, many that volunteered from American concentration camps, into which these citizens had been forcefully evacuated by the United States Government in 1942.

Location. 37° 48.642′ N, 122° 10.472′ W. Marker is in Oakland, California, in Alameda County. Memorial can be reached from Skyline Boulevard half a mile north of Joaquin Miller Road. The marker is located within Roberts Regional Recreation Area. There is an admission fee - be sure and request a map at the entrance station. Touch for map. Marker is at or near this postal address: 10570 Skyline Boulevard, Oakland CA 94619, United States of America. Touch for directions.

Other nearby markers. At least 8 other markers are within 2 miles of this marker, measured as the crow flies. Site of Blossom Rock Navigation Trees (a 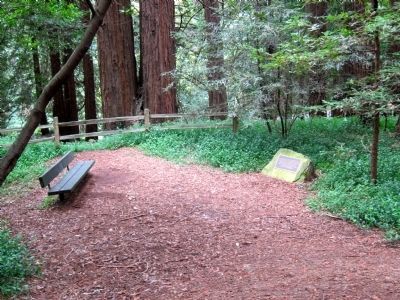 More about this memorial. The marker itself is about 300 feet into the woods. From the western edge of the lower parking lot, walk about 200-300 feet west, past the volleyball court. The 442nd marker itself is nestled in a small redwood grove, but is easily found by looking for the nearby 5-foot high stone monument for the Blossom Rock Navigation Trees historical marker, which is just footsteps away.

Also see . . .  442nd Regimental Combat Team Historical Society Website. The 442nd Regimental Combat Team was an infantry regiment in the United States Army comprised of Americans of Japanese ancestry. The 442nd fought in Italy and France during World War II against the German Army of Hitler's Third Reich. The 442nd earned a reputation for being a crack infantry unit and the regiment and its men received considerable battle honors and individual medals of valor.... (Submitted on April 5, 2013.)
Credits. This page was last revised on June 16, 2016. It was originally submitted on April 5, 2013, by Andrew Ruppenstein of Sacramento, California. This page has been viewed 731 times since then and 23 times this year. Photos:   1, 2. submitted on April 5, 2013, by Andrew Ruppenstein of Sacramento, California. • Syd Whittle was the editor who published this page.
Share This Page.