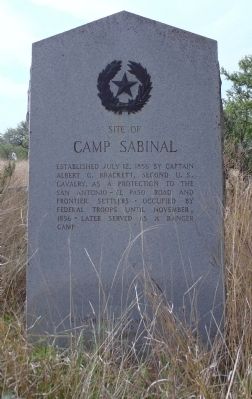 Photographed By William F Haenn, April 15, 2013
1. Site of Camp Sabinal Marker
Inscription.
Site of Camp Sabinal. . Established July 12, 1856 by Captain Albert G. Brackett, Second U.S. Cavalry, as a protection to the San Antonio - El Paso Road and frontier settlers . Occupied by Federal troops until November, 1856 . Later served as a Ranger camp . This historical marker was erected in 1936 by State of Texas. It is Near Sabinal in Uvalde County Texas

Topics and series. This historical marker is listed in these topic lists: Forts and Castles • Roads & Vehicles. In addition, it is included in the San Antonio-El Paso Road, and the Texas 1936 Centennial Markers and Monuments series lists. A significant historical date for this entry is July 12, 1853.

Location. 29° 18.824′ N, 99° 28.942′ W. Marker is near Sabinal, Texas, in Uvalde County. Marker is on U.S. 90, 0.4 miles east of Lower Sabinal Road (County Road 310), on the right when traveling east. This marker is about 50 yards from the highway. There is no pull-off. To visit the marker turn into the entrance to a ranch gate just before the Sabinal River bridge. The marker will be on your right. Touch for map. Marker is in this post office area: Sabinal TX 78881, United States of America. Touch for directions.

Other nearby markers. At least 8 other markers are within 11 miles of this marker, measured as the 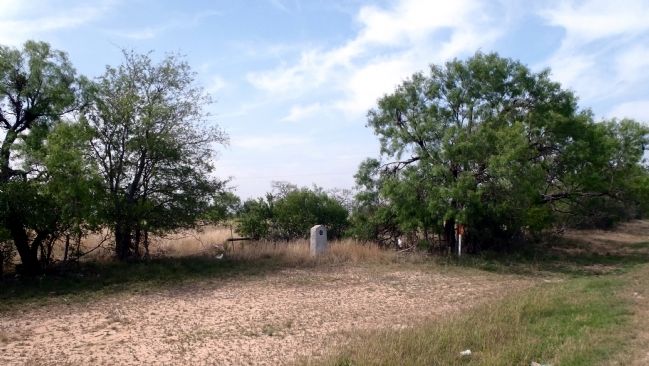 Regarding Site of Camp Sabinal. Albert Gallatin Brackett, soldier, was born in Cherry Valley, Otsego County, New York, 14 February, 1829. He removed to Indiana in 1846, and, during the war with Mexico, was First Lieutenant in the 4th Indiana Volunteer Infantry, attached to Lane's Brigade. Brackett was honorably mustered out, 16 July 1848.


On 3 March, 1855, he became captain in the 2nd United States Cavalry, and, after raising a company in Indiana and Illinois, served on the Texas frontier, including service at Fort Clark in 1856, distinguishing himself in actions against the Comanche Indians. He was the first United States officer that crossed into Mexico in pursuit of hostile Indians.

To his additional credit Brackett was a published author and well respected in the profession of arms for his knowledge of the cavalry and cavalry operations. He authored 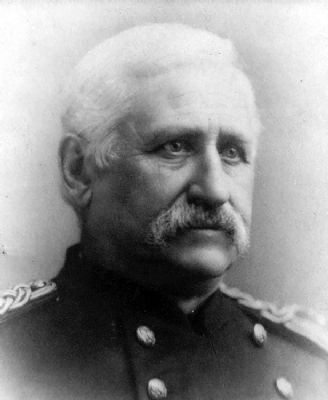 Circa 1880
3. Colonel Albert G. Brackett
"General Lane's Brigade in Central Mexico" (Cincinnati, 1854) and "History of the United States Cavalry" (New York, 1865). He also wrote many magazine and newspaper articles, especially in regard to military affairs and the development of the country.