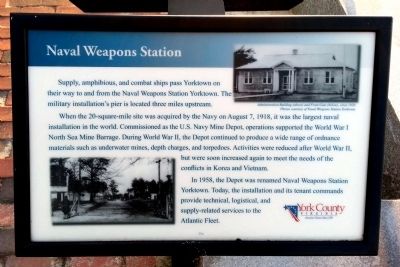 Supply, amphibious, and combat ships pass Yorktown on their way to and from the Naval Weapons Station Yorktown. The military installation’s pier is located three miles upstream.

When the 20-square-mile site was acquired by the Navy on August 7, 1918, it was the largest naval installation in the world. Commissioned as the U.S. Navy Mine Depot, operations supported the World War I North Sea Mine Barrage. During World War II, the Depot continued to produce a wide range of ordnance materials such as underwater mines, depth charges, and torpedoes. Activities were reduced after World War II, but were soon increased again to meet the needs of the conflicts in Korea and Vietnam.

In 1958, the Depot was renamed Naval Weapons Station Yorktown. Today, the installation and its tenant commands provide technical, logistical, and supply-related services to the Atlantic Fleet.

Administration Building (above) and Front Gate (below), circa 1920. Photos courtesy of Naval Weapons Station Yorktown.

Topics. This historical marker is listed in 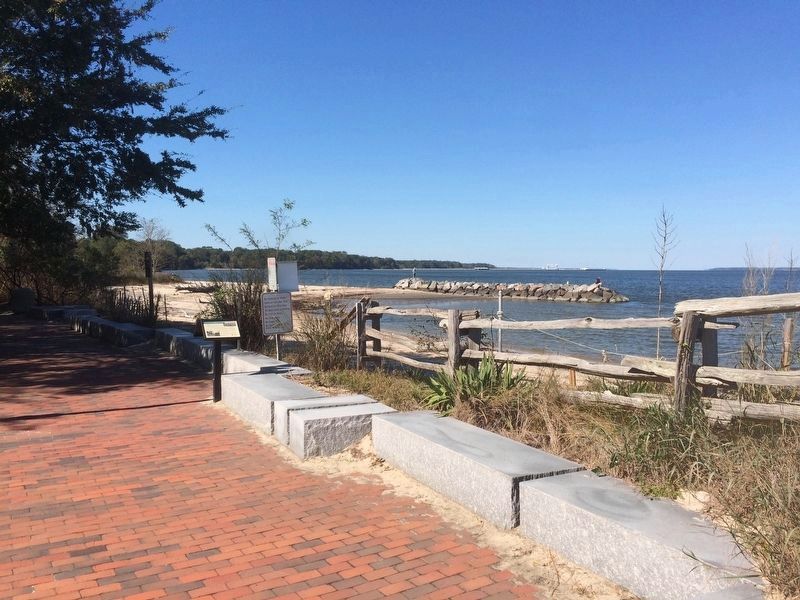 Click or scan to see
this page online
these topic lists: War, Korean • War, Vietnam • War, World I • War, World II. A significant historical year for this entry is 1918.

Location. 37° 14.376′ N, 76° 30.68′ W. Marker is in Yorktown, Virginia, in York County. Marker can be reached from Water Street west of Buckner Street when traveling west. Located along Yorktown's Riverwalk. Touch for map. Marker is in this post office area: Yorktown VA 23690, United States of America. Touch for directions. 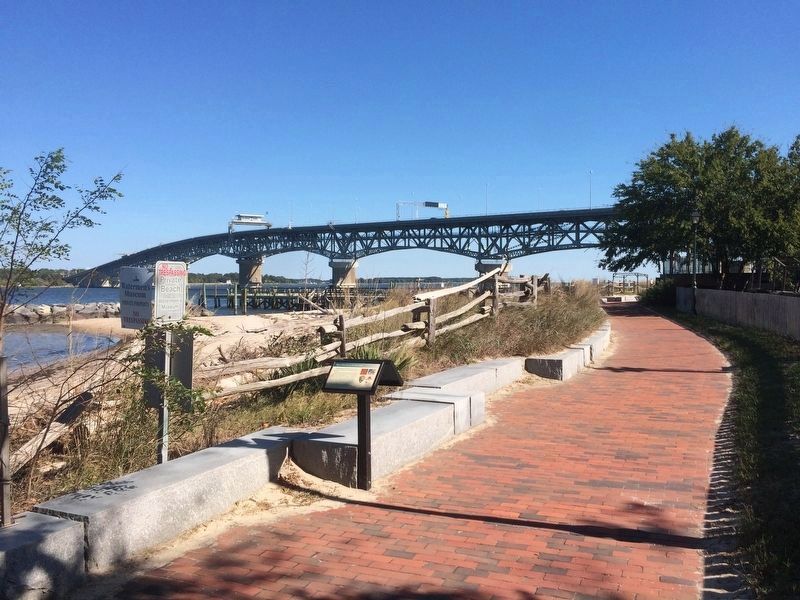 By J. Makali Bruton, October 23, 2016
3. Naval Weapons Station Marker
This view of the "Signs of the Past on the Riverwalk" side of the marker is towards the east, with the George P. Coleman Memorial Bridge in the background. 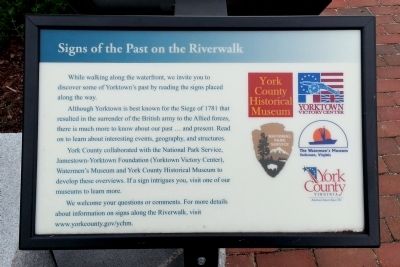 By Bernard Fisher
4. Signs of the Past on the Riverwalk
While walking along the waterfront, we invite you to discover some of Yorktown’s past by reading the signs placed along the way.

Although Yorktown is best known for the Siege of 1781 that resulted in the surrender of the British army to the Allied forces, there is much more to know about our past … and present. Read on to learn about interesting events, geography, and structures.

York County collaborated with the National Park Service,Jamestown-Yorktown Foundation (Yorktown Victory Center),Watermen’s Museum and York County Historical Museum to develop these overviews. If a sign intrigues you, visit one of our museums to learn more.