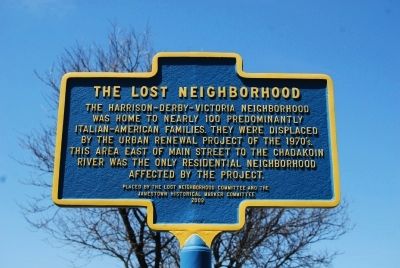 The Harrison-Derby-Victoria neighborhood was home to nearly 100 predominately Italian-American families. They were displaced by the Urban Renewal Project of the 1970's. This area east of Main Street to the Chadakoin River was the only residential neighborhood affected by the project.

Erected 2003 by The Lost Neighborhood Committee and The Jamestown Historical Marker Committee.

Location. 42° 5.566′ N, 79° 14.303′ W. Marker is in Jamestown, New York, in Chautauqua County. Marker is on South Main Street, 0.1 miles south of Harrison Street, on the right when traveling north. Touch for map. Marker is in this post office area: Jamestown NY 14701, United States of America. Touch for directions. 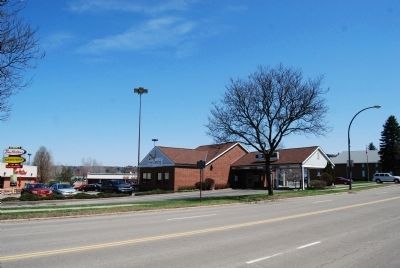