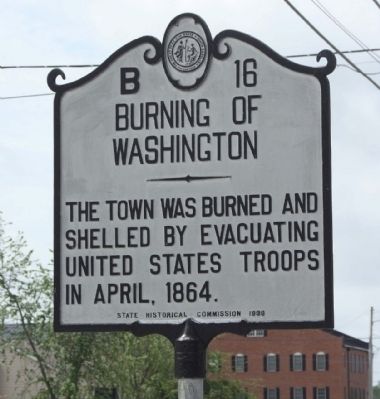 Photographed By Mike Stroud, April 19, 2013
1. Burning Of Washington Marker
Inscription.
Burning Of Washington. . The town was burned and shelled by evacuating United States troops in April, 1864. . This historical marker was erected in 1939 by State Historical Commission. It is in Washington in Beaufort County North Carolina

The town was burned and shelled by evacuating United States troops in April, 1864.

Topics and series. This historical marker is listed in this topic list: War, US Civil. In addition, it is included in the North Carolina Division of Archives and History series list. A significant historical month for this entry is April 1864.

Location. 35° 32.759′ N, 77° 3.611′ W. Marker is in Washington, North Carolina, in Beaufort County. Marker is at the intersection of Bridge Street (Business U.S. 17) and West Second Street, on the left when traveling north on Bridge Street. Touch for map. Marker is in this post office area: Washington NC 27889, United States of America. Touch for directions.

Other nearby markers. At least 8 other markers are within walking distance of this marker. C. C. Cambreleng (about 300 feet away, measured in a direct line); St. John the Evangelist Church (about 400 feet away); John H. Small (about 500 feet away); Siege Of Washington (about 600 feet away); Havens Memorial Building (about 700 feet away); Lindsay C. Warren (about 700 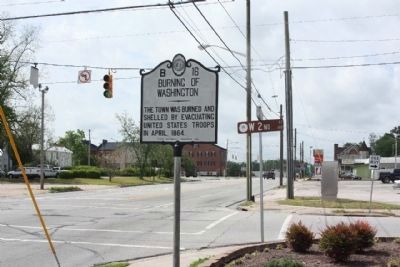 Regarding Burning Of Washington. In 1862 a Boston Journal correspondent described the Washington as an agreeable town of about 2,500 residents “some two thirds of whom have seen fit to leave for the interior.” When forces under Brigadier General Ambrose Burnside, arrived on March 21, the remaining citizens “met the troops with every expression of welcome.” So prevalent were the Union sentiments that Burnside stationed troops from the 24th Massachusetts Regiment and several gunboats at the town, effectively occupying Washington.

In March of 1863, Confederate General Daniel Harvey Hill launched an attack on the federal garrison at
Washington in an attempt to reclaim the city. Confederates seized one battery and fortified others with the intention of launching an artillery bombardment. In the Pamlico River, piles that were cut off below the water line and other sunken impediments made for perilous river travel. Union General J. G. Foster and his men had made it into Washington just prior to Hill’s placement of troops along roads 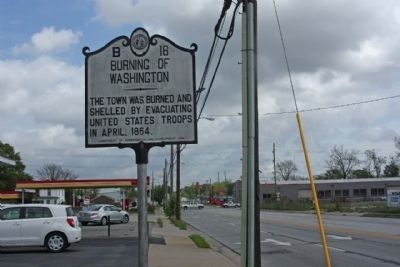 Photographed By Mike Stroud, April 19, 2013
3. Burning Of Washington Marker looking north on Bridge Street
to prevent federal reinforcements from reaching the garrison. The armies engaged in artillery attacks off and on for until mid-April when the Escort, a Union steamer, ran past the Confederate batteries twice. The arrival of supplies and reinforcements having bolstered the federal garrison, Hill withdrew his troops from Washington.

Washington remained under federal control until April 26, 1864 (the present marker states incorrectly
that the Confederates held Washington from March until November), when, as a result of the Confederate victory at Plymouth, Brigadier General Edward Harland was ordered to withdraw from the town. For four days the evacuating troops pillaged Washington, destroying what they could not carry. As the final detachments were preparing to leave Washington on April 30, a fire started in the riverfront warehouse district,spreading quickly, until about one half of the city was in ashes.
General Robert F. Hoke entered Washington finding “a ruined city…a sad scene—mostly…chimneys and Heaps of ashes to mark the place where Fine Houses once stood, and the Beautiful trees, which shaded the side walks, Burnt, some all most to a coal.” Hoke left the 6th North Carolina to defend Washington and to assist its citizens. A reversal of fortune would come in November 1864. Following the Union’s recapture of Plymouth, Washington and the whole sound region, again fell under federal control.
(North Carolina Office of Archives & History — Department of Cultural Resources)
Credits. This page was last revised on June 22, 2021. It was originally submitted on April 24, 2013, by Mike Stroud of Bluffton, South Carolina. This page has been viewed 630 times since then and 62 times this year. Photos:   1, 2, 3. submitted on April 25, 2013, by Mike Stroud of Bluffton, South Carolina.
Share this page.