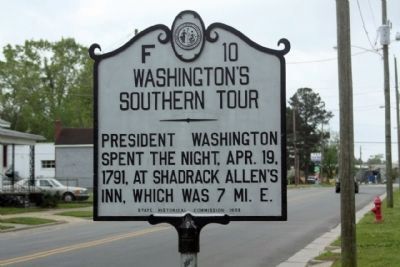 Erected 1939 by Division of Archives and History. (Marker Number F-10.)

Topics and series. This historical marker is listed in these topic lists: Government & Politics • Industry & Commerce • Notable Events. In addition, it is included in the Former U.S. Presidents: #01 George Washington, the George Washington Slept Here, and the North Carolina Division of Archives and History series lists. A significant historical date for this entry is April 19, 1779.

Other nearby markers. At least 8 other markers are within 8 miles of this marker, measured as the crow flies. Former Colleges (approx. 0.2 miles away); Fort Fisher Hero (approx. 2.6 miles away); Scuffleton Bridge (approx. 3.9 miles away); Haddocks Crossroads (approx. 4 miles away); Blount Hall 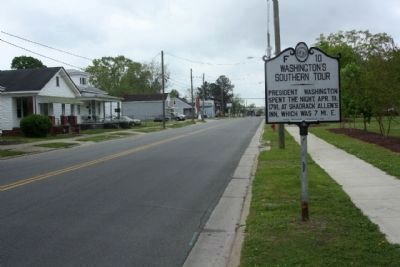 Regarding Washington's Southern Tour.
George Washington, Revolutionary War hero elected as the first president of the United States in February 1789, is one of the most celebrated figures in American history. For more than two centuries, the story of his eventful life has been marked by both truth and legend. The concept of the presidency was new, and Washington was fully aware that his decisions would set precedents. He resolved to tour the United States to observe political climate and culture, to thank his supporters, and to instill a sense of unity in the new country. As such, his tour and stops along the way became important landmarks in the areas he touched. Washington’s stature in history is almost mythical, and has given rise to the popular claim—in well-known towns and obscure hamlets along the Eastern Seaboard—that “George Washington Slept Here.” The claims are not surprising, however, as Washington saw more of his country while in office than any other American president before the twentieth century. He also kept a detailed diary chronicling his travels.
While on tour, he sought differing viewpoints and wanted to see and be seen by as many people as possible. Soon after taking office, he planned and undertook a successful 28-day tour of New England.
In early 1791, after establishing a site for the new “Federal District” along the Potomac River, Washington embarked on a tour of the Southern states—a product of his desire to visit every state during his term of office. Proceeding from Mount Vernon via Fredericksburg and Richmond (Virginia) into North Carolina, Washington crossed the Roanoke River into Halifax in mid-April 1791. From there, the President’s
carriage tour took him through Tarboro, Greenville, New Bern, Trenton, and Wilmington before entering South Carolina. Washington re-entered North Carolina near Charlotte and traveled northward, visiting Salisbury, Salem, and Guilford Court House.
After two nights in Halifax, Washington left on the morning of Monday, April 18 for Tarboro. He remarked that the town of Tarborough was “more lively and thriving” than Halifax. Washington was met at the Roanoke River by Col. John B. Ashe, who escorted him into town. Washington’s procession was welcomed by a salute from a single cannon but the effort was appreciated by the President. While in town, Washington was entertained at the home of Major Reading Blount. After a single night’s stay, Washington left Tarboro the next morning for Pitt County. (North Carolina Office of Archives & History — Department of Cultural Resources)
Credits. This page was last revised on August 6, 2020. It was originally submitted on May 1, 2013, by Mike Stroud of Bluffton, South Carolina. This page has been viewed 545 times since then and 58 times this year. Photos:   1, 2. submitted on May 2, 2013, by Mike Stroud of Bluffton, South Carolina.
Share this page.