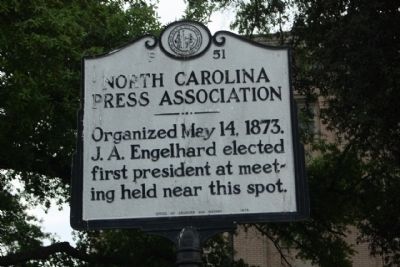 Organized May 14, 1873. J. A. Engelhard elected first president at meeting held near this spot.

Topics and series. This historical marker is listed in this topic list: Communications. In addition, it is included in the North Carolina Division of Archives and History series list. A significant historical date for this entry is May 14, 1743.

Location. 35° 22.925′ N, 77° 59.641′ W. Marker is in Goldsboro, North Carolina, in Wayne County. Marker is on East Walnut Street near South William Street, on the left when traveling south. Touch for map. Marker is in this post office area: Goldsboro NC 27530, United States of America. Touch for directions. 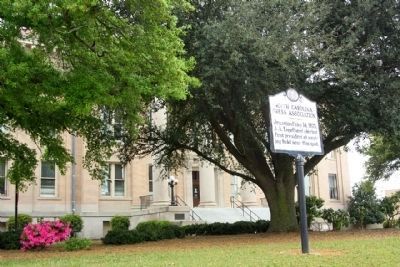 Regarding North Carolina Press Association. An article appeared on May 15, 1873, in the Wilmington Morning Star, reporting that the previous day, “a convention of gentlemen conducting or representing newspapers published in the State assembled at the court house (in Goldsboro)…for the purpose of forming an association for mutual benefit and protection.” Major J. A. Englehard of the Wilmington Journal, who had proposed the idea of such an organization, was elected president. The group immediately resolved to make the association a permanent one. Aside from the benefits of opening lines of communication in the profession, the representatives to the convention hoped to institute regulations on advertising, appointing a special committee to investigate the various aspects of that business. The abundant patent medicine companies and assorted other Victorian era quacks were of particular interest to the newspaper professionals, because while some editors 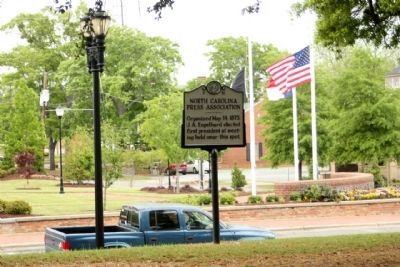 Photographed By Mike Stroud, April 19, 2013
3. North Carolina Press Association Marker seen along East Walnut Street
refused to run advertisements for products produced by such questionable outfits, others gave their representatives discounted rates.
The organization adopted the name North Carolina Press Association. More than just a professional union, the North Carolina Press Association served as a fraternal society, as well. During their first
convention, the members were invited by the Atlantic Railroad to travel to Morehead City and Beaufort,
where they were entertained at the Ocean House. Over the years the Press Association has effectively
offered support to issues such as the good roads movement, improving public education, and strengthening local government.(North Carolina Office of Archives & History — Department of Cultural
Resources)
Credits. This page was last revised on July 2, 2021. It was originally submitted on May 12, 2013, by Mike Stroud of Bluffton, South Carolina. This page has been viewed 392 times since then and 3 times this year. Photos:   1, 2, 3. submitted on May 15, 2013, by Mike Stroud of Bluffton, South Carolina.
Share this page.