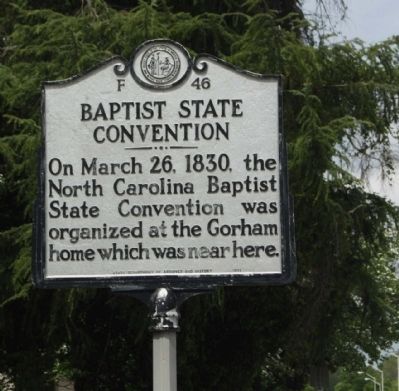 On March 26, 1830, the North Carolina Baptist State Convention was organized at the Gorham home which was near here.

Topics and series. This historical marker is listed in this topic list: Churches & Religion. In addition, it is included in the North Carolina Division of Archives and History series list. A significant historical month for this entry is March 1850. 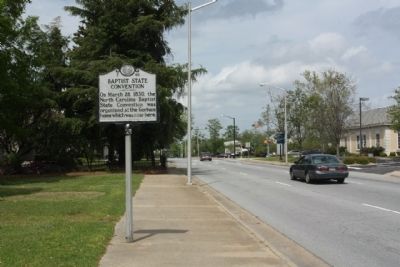 Regarding Baptist State Convention.    The Baptist State Convention of North Carolina was founded on March 26, 1830, at the Greenville home of A. I. Gorham. The organization had its roots in the North Carolina Baptist Missionary Society, which was formed in 1811 as a “General Meeting” where Baptists could plan missionary work. The Baptist Missionary Society came to be known as the Benevolent Society. Prior to the state society, there were numerous local missionary societies, organized within individual churches and among groups of churches. The state organization was seen as a means of coordinating the work of the smaller groups. The founders of the Baptist State Convention created two other related agencies once the convention was operational. The statewide Baptist newspaper, the Biblical Recorder, was established in 1833 and Wake Forest College the following 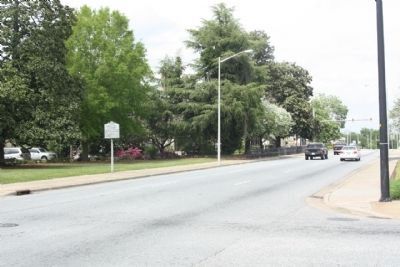 Photographed By Mike Stroud, April 19, 2013
3. Baptist State Convention Marker seen looking north along South Green Street near West 4th Street
year. The Baptist Female University, now Meredith College, opened with the convention’s support in 1899.
Today the Baptist State Convention offers an outlet for cooperative missionary work as well as guidance to church leaders and administrative staff. Resources include instruction and guidelines for general operations and advice for the churches quests “to develop and sustain relevant ministries for the 21st century.” The state convention assists groups in forming new Baptist congregations in the state, as well. The Baptist State Convention operates educational facilities, children’s homes, retirement homes, and a credit union, among missionary and support programs. The home office for the convention is in Cary. (North Carolina Office of Archives & History — Department of Cultural Resources)
Credits. This page was last revised on June 22, 2021. It was originally submitted on May 16, 2013, by Mike Stroud of Bluffton, South Carolina. This page has been viewed 343 times since then and 37 times this year. Photos:   1, 2, 3. submitted on May 16, 2013, by Mike Stroud of Bluffton, South Carolina.
Share this page.