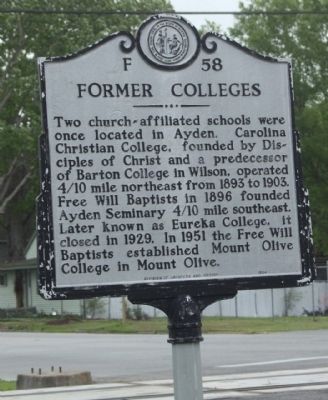 Photographed By Mike Stroud, April 19, 2013
1. Former Colleges Marker
Inscription.
Former Colleges. . , Two church-affiliated schools were once located in Ayden. Carolina Christian College, founded by Disciples of Christ and a predecessor of Barton College in Wilson, operated 4/10 mile northeast from 1893 to 1903. Free Will Baptists in 1896 founded Ayden Seminary 4/10 mile southeast. Later known as Eureka College, it closed in 1929. In 1951 the Free Will Baptists established Mount Olive College in Mount Olive. . This historical marker was erected in 1994 by Division of Archives and History. It is in Ayden in Pitt County North Carolina

Two church-affiliated schools were once located in Ayden. Carolina Christian College, founded by Disciples of Christ and a predecessor of Barton College in Wilson, operated 4/10 mile northeast from 1893 to 1903. Free Will Baptists in 1896 founded Ayden Seminary 4/10 mile southeast. Later known as Eureka College, it closed in 1929. In 1951 the Free Will Baptists established Mount Olive College in Mount Olive.

Erected 1994 by Division of Archives and History. (Marker Number F-58.)

Topics and series. This historical marker is listed in these topic lists: Churches & Religion • Education. In addition, it is included in the North Carolina Division of Archives and History series list. A significant historical year for this entry is 1893.

Other nearby markers. At least 8 other markers are within 8 miles of this marker, measured as the crow flies 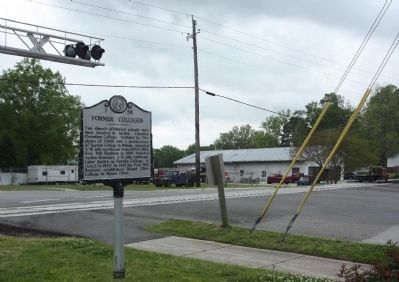 Regarding Former Colleges.    In 1891 adherents of the Disciples of Christ in eastern North Carolina directed their convention president to seek a site for an institution of higher learning. Bids were received from Wilson’s Mills, Dunn, Grifton, and Ayden. The trustees accepted the Ayden offer of $500 and five acres. Incorporated in 1891, the town was on the Wilmington and Weldon Railroad. Importantly for the Disciples, Ayden was centrally located in eastern counties where the strength of the denomination rested. At a meeting of trustees in April 1893, they chose the name Carolina Christian College. Construction soon commenced on two buildings and classes were held in the fall. The first principal was minister L. T. Rightsell (1862-1927). In 1901 the annual convention of the Disciples of Christ (also known as the Christian Church) voted to establish a larger college in Wilson on the campus of the former Kinsey Institute. 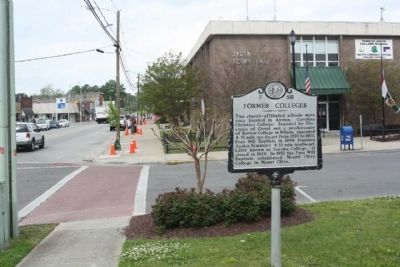 In March 1896 a committee of Free Will Baptists elected officers, drafted bylaws, and chose Ayden as the site for their planned school. Contributions were solicited in the pages of The Free Will Baptist, edited by T. F. Harrison. As soon as enough money was on hand, construction began on a two-story frame classroom building, completed in early 1898. The first principal was J. E. B. Davis. Additional buildings, including a 500-seat auditorium were begun in 1911 under new principal J. E. Sawyer. The first college-level courses were added in 1909.

As the rise of public schools led to a decrease in enrollment, it became clear that the school would have to close unless steps were taken to offer additional instruction. In 1920 the board of trustees voted to close the seminary and concentrate on raising funds for the proposed college. The seminary reopened in 1922 and the first full year of college work was offered in 1925. Eureka was chosen from ninety submissions in 1926 as the name for the new school. R. B. Spencer was its president. Enrollment was disappointing and by 1929 the college, $68,000 in debt, was forced to close. Consideration was given to using the main building as an orphanage, but it burned on November 4, 1931. The only remaining building, a boys dormitory, has since been converted into a private home. In 1951 Free Will Baptists chartered the school today known as Mount Olive College. (North Carolina Office of Archives & History — Department of Cultural Resources)
Credits. This page was last revised on July 1, 2021. It was originally submitted on June 12, 2013, by Mike Stroud of Bluffton, South Carolina. This page has been viewed 440 times since then and 55 times this year. Photos:   1, 2, 3. submitted on June 12, 2013, by Mike Stroud of Bluffton, South Carolina.
Share this page.