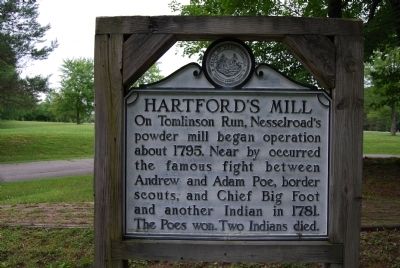 On Tomlinson Run, Nesselroad's powder mill began operation about 1795. Near by occurred the famous fight between Andrew and Adam Poe, border scouts, and Chief Big Foot and another Indian in 1782. The Poes won. Two Indians died.

Topics and series. This historical marker is listed in these topic lists: Industry & Commerce • Native Americans. In addition, it is included in the West Virginia Archives and History series list. 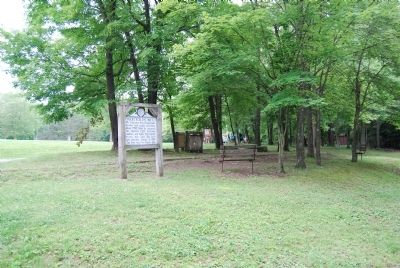 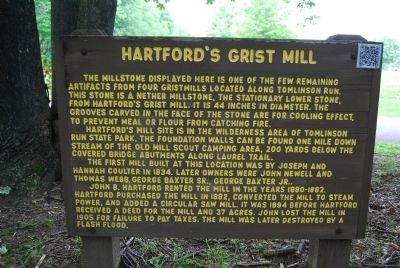 By Mike Wintermantel, July 7, 2013
3. Hartford's Grist Mill Marker
The millstone displayed here is one of the few remaining artifacts from four gristmills located along Tomlinson Run. This stone is a nether millstone, the stationary lower stone, from Hartford's Grist Mill. It is 44 inches in diameter. The grooves carved in the face of the stone are for cooling effect, to prevent meal or flour from catching fire.
Hartford's Mill site is in the wilderness area of Tomlinson Run State Park. The foundation walls can be found one mile downstream of the old mill scout camping area, 200 yards below the covered bridge abutments along Laurel Trail.
The first mill built at this location was by Joseph and Hannah Coulter in 1834. Later owners were John Newell and Thomas Webb, George Baxter, Sr., George Baxter, Jr.
John B. Hartford rented the mill in the years 1880-1882. Hartford purchased the mill in 1882, converted the mill to steam power, and added a circular saw mill. It was 1894 before Hartford received a deed for the mill and 37 acres. John lost the mill in 1905 for failure to pay taxes. The mill was later destroyed by a flash flood. 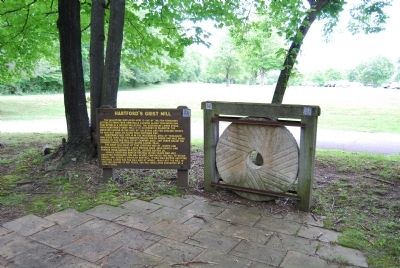