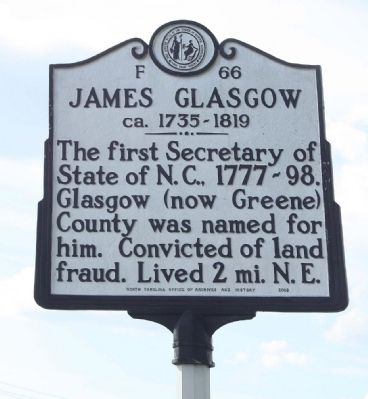 Photographed By Mike Stroud, April 18, 2013
1. James Glasgow Marker
Inscription.
James Glasgow. ca. 1735-1819. The first Secretary of State of N.C., 1777-98. Glasgow (now Greene) County was named for him. Convicted of land fraud. Lived 2 mi. N.E. . This historical marker was erected in 2003 by North Carolina Office of Archives and History. It is Near Snow Hill in Greene County North Carolina

Topics and series. This historical marker is listed in these topic lists: Law Enforcement • Political Subdivisions • Settlements & Settlers. In addition, it is included in the North Carolina Division of Archives and History series list. A significant historical year for this entry is 1777. 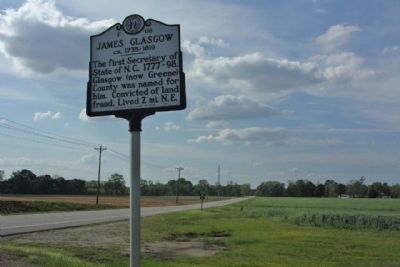 Click or scan to see
this page online
(approx. 5.8 miles away); Peacock's Bridge (approx. 7.1 miles away); Nuclear Mishap (approx. 8.2 miles away); Hookerton Defenses (approx. 10 miles away). Touch for a list and map of all markers in Snow Hill.

Regarding James Glasgow.  The naming of a county can provide a lesson in North Carolina history. What is now Greene County was once part of Johnston but in 1758 it became Dobbs County for royal governor Arthur Dobbs. In 1791 that name was “expunged from our map,” as historian Kemp Battle phrased it, and a new county was named for the Secretary of State, James Glasgow. When Glasgow met an ignominious end, in 1799 the name was changed to Greene to honor Nathanael Greene, the hero of Guilford Courthouse.

James Glasgow (ca. 1735-1819), born in Maryland, in 1765 acquired a plantation on Contentnea Creek known as “Fairfield” as a gift from his father-in-law. Glasgow, active in the colonial militia, took part in the Battle of Moores Creek Bridge but soon forsook the military for politics. As assistant secretary of the Provincial Congresses, 1775-1776, and clerk of the Council of State, 1776-1779, Glasgow earned the respect of the state’s Revolutionary patriots. His reward 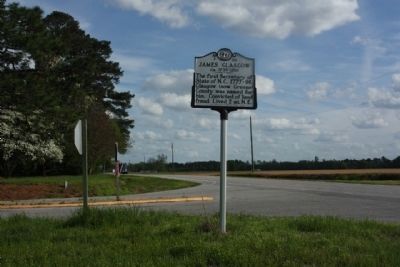 was election by the legislature in 1777 as North Carolina’s first Secretary of State. A principal duty of that position was the oversight of the military land grant program, the issuance of property in what became Tennessee to veterans of the Revolution.

In 1797, on receipt of a letter from Andrew Jackson setting forth charges of impropriety in the issuance of the grants, Gov. Samuel Ashe and the legislature set in motion events leading to Glasgow’s resignation and eventual conviction on land fraud charges. Notwithstanding the fact that others were involved in the scandal, Glasgow suffered the consequences. The committee of inquiry determined that the Secretary of State should be charged with a misdemeanor, dereliction of duty as a public officer. A tribunal found him guilty on two counts and fined him 1,000 pounds on each. Glasgow left the state and settled near Nashville, Tennessee, where he died in 1819. “Behold the reward of dishonesty and official corruption!” wrote Kemp Battle in 1903.
Credits. This page was last revised on June 21, 2021. It was originally submitted on July 12, 2013, by Mike Stroud of Bluffton, South Carolina. This page has been viewed 542 times since then and 76 times this year. Photos:   1, 2, 3. submitted on July 12, 2013, by Mike Stroud of Bluffton, South Carolina.
Share this page.