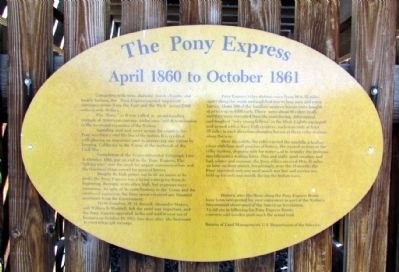 Competing with time, distance, harsh climate, and hostile Indians, the Pony Express carried important communications from the East and the West across 2,000 miles in only 10 days.
The "Pony," as it was called, is an outstanding example of American courage, endurance, and determination in the westward expansion of the Nation.
Speeding mail and news across the country, the Pony was then a vital life line of the nation. It is credited with playing an important part in preserving our nation by keeping California in the Union at the outbreak of the Civil War.
Completion of the Transcontinental Telegraph Line in October 1861, put an end to the Pony Express. The "talking wire" met the need for urgent communication and the Overland Stage served for general letters.
Despite its high prices (up to $5 an ounce at its peak), the Pony Express was a losing enterprise from its beginning. Receipts were often high, but expenses were enormous. In spite of the contributions to the Union and the westward expansion, the Pony never received any financial assistance from the Government.
Yet its founders, 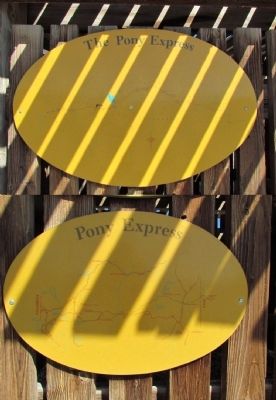 Click or scan to see
this page online
W.H. Russell, Alexander Majors, and William B. Waddell, felt the need was important, and the Pony Express operated in the red until it went out of business on October 28, 1861, four days after the first coast to coast telegraph message.
Pony Express relay stations were from 10 to 35 miles apart along the route and each had two to four men and extra horses. About 500 of the hardiest western horses were bought at prices up to $200 each. There were about 80 riders in all, and they were recruited from the most daring, determined, and toughest "wiry young fellows" in the West. Lightly equipped and armed with a Navy Colt revolver, each man rode at least 35 miles in each direction, changing horses at three relay stations along the way.
Over his saddle the rider carried the mochila, a leather cover with four mail pouches of letters. He wasted no time at the relay stations, stopping only for water and to transfer the precious mochila onto a waiting horse. Day and night, good weather and bad, winter and summer, the Pony riders covered 10 to 15 miles an hour on their routes. Surprisingly, over the 18 months the Pony operated, only one mail puch was lost and service was held up for only one month during the Indian wars. 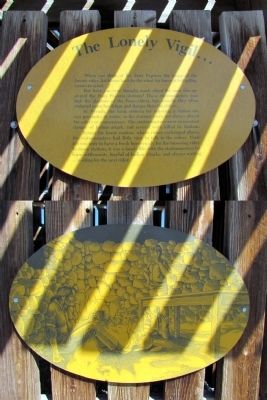 By Duane Hall, May 30, 2013
3. The Pony Express Marker
(Panels 4 and 5)
of the American Revolution. To aid you in following the Pony Express Route, concrete and wooden posts mark the actual trail.

When you think of the Pony Express, the image of the heroic rider, hat blown back by the wind, his horse at full gallop, comes to mind.
But have you ever thought much about the men who operated the Pony Express stations? These stationmasters may lack the glamour of the Pony riders, but actually they often endured more hardships and danger than the riders.
In Nevada, the basic criteria for selecting a station site was proximity to water, so the stations were not always placed for safety or convenience. The stationmasters were in constant danger of Indian attack, and several were killed by Indians.
Except for home stations, where riders exchanged places, the stationmasters had little time to talk to the riders. Their job was only to have a fresh horse ready for the incoming rider. In many stations, it was a lonely life, with the stationmasters far from settlements, fearful of Indian attacks, and always waiting ... waiting for the next rider.

Robert Haslam, known as "Pony Bob," was the best known Pony Express rider in Nevada. Cold Springs Station played a major role in one of the Pony Bob's most exciting adventures—380 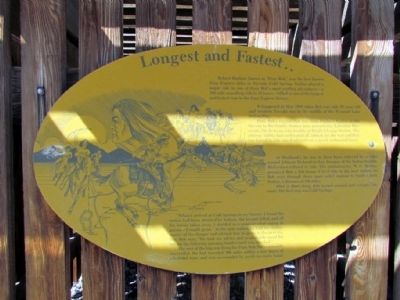 By Duane Hall, May 30, 2013
4. The Pony Express Marker
(Panel 6)
mile roundtrip ride in 36 hours—billed as one of the longest and fastest runs in the Pony Express history.
It happened in May 1860 when Bob was only 19 years old and western Nevada was in the middle of the Pyramid Lake Indian War.
Pony Bob's regular run was from Friday's Station in the Sierras to Buckland's Station near present-day Lahontan Reservoir. He first ran into trouble at Reed's Change Station. The citizens' militia had confiscated all animals for the war and Bob was forced to ride into Buckland's on a nearly-exhausted horse.
At Buckland's he was to have been relieved by a rider named Johnson Richardson but, because of the Indian trouble, Richardson refused to ride. The stationmaster W.C. Marley promised Bob a $30 bonus if he'd ride to the next station. So Bob went through three more relief stations to Smith Creek Station, a distance of 190 miles.
After a short sleep, Bob turned around and retraced his route. His first stop was Cold Springs.
"When I arrived at Cold Springs, to my horror, I found the station had been attacked by Indians, the keeper killed, and all the horses taken away. I decided in a moment what course to pursue—I would go on." At the next station, he told the stationmaster of the danger and advised him to go on to the next station. Bob says, "He took my advice and so probably saved his life, 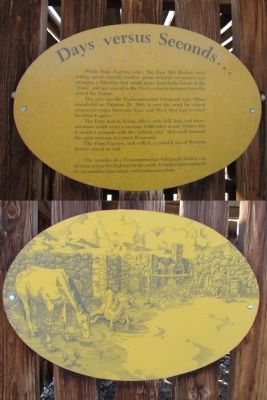 By Duane Hall, May 30, 2013
5. The Pony Express Marker
(Panels 7 and 8)
for the following morning Smith Creek was attacked."
The rest of the trip was tiring for Pony Bob but reasonably uneventful. He had traveled 380 miles within a few hours of scheduled time, and was surrounded by perils on every hand.

While Pony Express riders like Pony Bob Haslam were setting speed records, another group of hardy westerners was stringing a thin wire that would prove to be fatal to the future of the "Pony" and put an end to the West's relative isolation from the rest of the nation.
The wire was the Transcontinental Telegraph Line. When completed on October 24, 1861, it met the need for urgent communication between East and West that had created the Pony Express.
The Pony and its heroic riders, with skill, luck, and determination, could carry a message 2,000 miles in only 10 days, but it couldn't compete with the "talking wire" that could transmit the same message in a mere 10 seconds.
The Pony Express, and with it, a colorful era of Western history, was at an end.

The remains of a Transcontinental Telegraph Station can be seen across the highway to the north. It too has been replaced by yet another innovation—telecommunications.

Cold Springs Station Then and Now ... 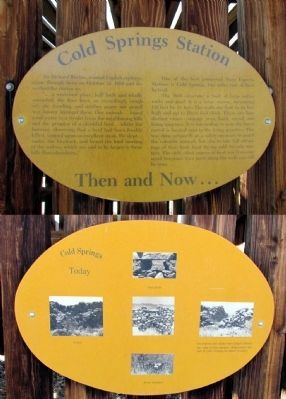 By Duane Hall, May 30, 2013
6. The Pony Express Marker
(Panels 9 and 10)
came through here on October 15, 1860 and described the station as:
"... a wretched place, half built and wholly unroofed; the four boys, an exceedingly rough set, ate standing, and neither paper nor pencil was known amongst them. Our animals ... found good water in a rivulet from the neighboring hills and the promise of a plentiful fee ... whilst the humans, observing that a beef had been freshly killed, supped upon an excellent steak. We slept ... under the haystack, and heard the loud howling of the wolves, which are said to be larger in these hills than elsewhere."

One of the best preserved Pony Express Stations is Cold Springs, two miles east of here by trail.
The 1860 structure is built of large native rocks and mud. It is a large station, measuring 116 feet by 51 feet. The walls are four to six feet high and up to three feet thick. There are four distinct rooms--storage area, barn, corral, and living quarters. It is interesting to note the horse corral is located next to the living quarters. This was done primarily as a safety measure to guard the valuable animals, but also to take full advantage of their body heat during cold Nevada winters. The only other source of heat was from one small fireplace. Gun ports along the walls can still be seen.

Erected by Bureau of Land Management. 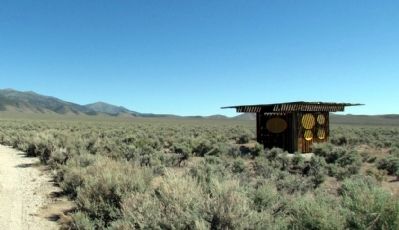 By Duane Hall, May 30, 2013
7. The Pony Express Marker
This historical marker is listed in these topic lists: Communications • Roads & Vehicles. In addition, it is included in the Pony Express National Historic Trail 🐎 series list. A significant historical month for this entry is October 1861. 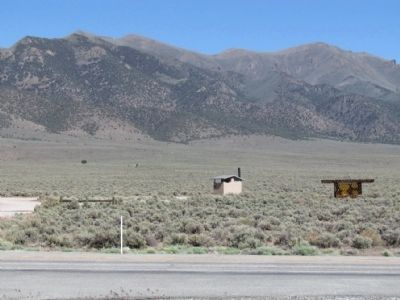