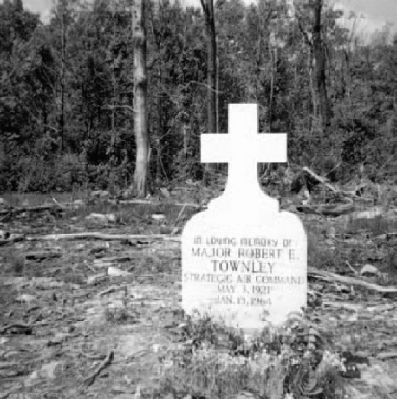 Marker series. This marker is included in the B-52 Bomber Crash in Maryland marker series.

Location. 39° 34.123′ N, 79° 4.735′ W. Marker is in Barton, Maryland, in Allegany County. Marker can be reached from the intersection of Pine Swamp Road and Westernport Road. The marker is about 1000 yards east of the intersection, on private property that cannot be accessed without the owner's permission. The Big Savage hiking trail comes to within about 300 feet of the marker, where the DNR is still planning to erect a publicly accessible marker. Touch for map. Marker is in this post office area: Barton MD 21521, United States of America. Touch for directions. 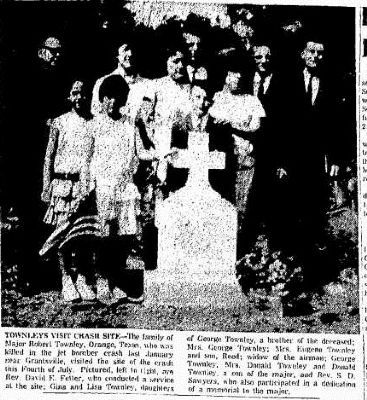 By Cumberland Times, 1964
2. Newspaper clipping of the marker at the dedication ceremony
This copy of a Cumberland Times photo was submitted by Gina Townley Swinburn to the Find a Grave website. "Townleys visit crash site - The family of Major Robert Townley, Orange, Texas, who was killed in the jet bomber crash last January near Grantsville, visited the site of the crash this Fourth of July. Pictured, left to right, are Rev. David F. Feller, who conducted a service at the site; Gina and Lisa Townley, daughters of George Townley, a brother of the deceased; Mrs. George Townley; Mrs. Eugene Townley and son, Reed; widow of the airman; George Townley, Mrs. Donald Townley and Donald Townley, a son of the major, and Rev. S. D. Sawyers, who also participated in the dedication of a memorial to the major."
Welcome to "Lefty" Grove Memorial Park (approx. 5.3 miles away); Coming Home to Lonaconing (approx. 5.3 miles away); The Early Years — Lonaconing, Maryland (approx. 5.3 miles away).

More about this marker. The marker is at the location where the Strategic Air Command's B-52 crashed, with Major Robert Townley still on board.

Regarding Major Robert E. Townley. The B-52 Strato-Fortress was on a routine mission carrying two 24-megaton nuclear bombs. This was the height of the Cold War and 12 atomic-bomb laden aircraft such as this were airborne at all times. The B-52 crashed on Big Savage Mountain near Lonaconing, during a violent snow storm after the tail fin broke off during massive turbulence. Three of the crew died, two survived. The ordnance was recovered.

Also see . . .  Cold War mission ended in tragedy for B-52 crew. This page, linked from the Salisbury PA Historical Web Site, appears to be the most comprehensive story, but there are several others available with a google search. (Submitted on August 4, 2013, by F. Robby of Baltimore, Maryland.)

Additional comments.
1. B-52 Crash Markers
There are 4 markers related to this incident. One is in the town of Grantsville MD as a tribute to the 5 men involved in the incident, and the citizens who helped search for the 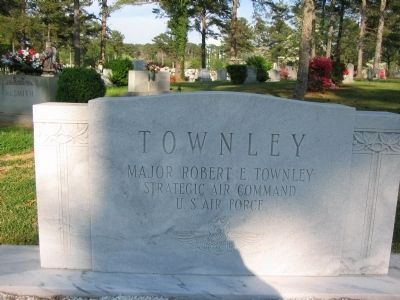