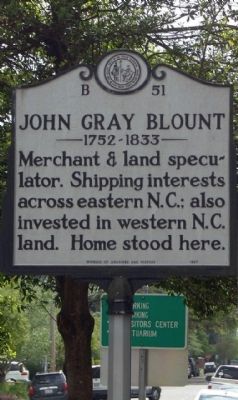 Erected 1987 by Division of Archives and History. (Marker Number B-51.)

Location. 35° 32.524′ N, 77° 3.312′ W. Marker is in Washington, North Carolina, in Beaufort County. Marker is on East Main Street near South Market Street, on the right when traveling east. Touch for map. Marker is in this post office area: Washington NC 27889, United States of America. Touch for directions. 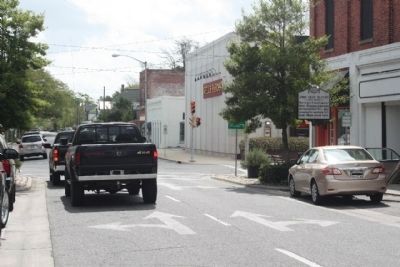 Regarding John Gray Blount.   John Gray Blount (1752-1833) and his family exercised considerable influence over the political and economic life of North Carolina and Tennessee during the early National period. His half-brother William Blount served as governor of Tennessee during the War of 1812 while his half-brother Thomas served in Congress when not tending the family business in Tarboro.

J. G. Blount’s business dealings ranged westward to Tennessee and along the Atlantic seaboard and in the Caribbean, but his base of operation from his marriage in 1778 forward was in Washington. Blount made the town his home when it was still known as Forks of the Tar River. He and his business partners had large shipping interests, owning wharves, flat boats, and seagoing vessels. They also owned sawmills, gristmills, tanneries, and cotton gins, and engaged in agricultural pursuits and the slave trade. Blount was heavily involved in land speculation, employing agents to buy and sell large tracts in western North Carolina and Tennessee. Blount represented Beaufort in the House of Commons from 1782 to 1793, served in the constitutional convention of 1787, in the state Senate for three terms, and on the council of state on several occasions. He was a trustee of the University of North Carolina.

Alice Keith, editor of the first two volumes of the Blount papers, noted that John Gray Blount was “one of the most important figures in North Carolina in his day” in spite of the fact that he held not higher office and is generally less well known than his brothers. Blount’s home, a small frame building, is pictured in the second volume of the Blount papers with a caption noting, “Blount did contemplate building a home in keeping with his wealth and social station, but the opportune time never came.” The house was occupied by Blount’s descendants until its demolition in 1923. (North Carolina Office of Archives & History — Department of Cultural Resources)
Credits. This page was last revised on November 28, 2019. It was originally submitted on August 7, 2013, by Mike Stroud of Bluffton, South Carolina. This page has been viewed 413 times since then and 34 times this year. Photos:   1, 2. submitted on August 7, 2013, by Mike Stroud of Bluffton, South Carolina.
Share This Page.