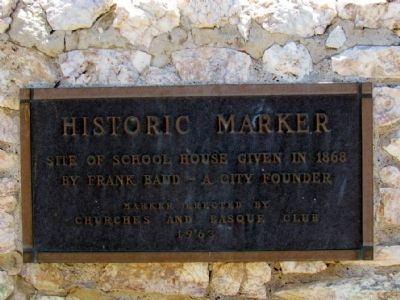 Photographed By Duane Hall, July 5, 2013
1. Historic Marker Marker
Inscription.
Historic Marker. . Site of school house given in 1868 by Frank Baud - a city founder . This historical marker was erected in 1963 by Churches and Basque Club. It is in Winnemucca in Humboldt County Nevada

Erected 1963 by Churches and Basque Club.

Topics. This historical marker is listed in this topic list: Education. A significant historical year for this entry is 1868.

Other nearby markers. At least 8 other markers are within walking distance of this marker. Winnemucca World War I American Legion Honor Roll (within shouting distance of this marker); Great Black Stone (about 300 feet away, measured in a direct line); Humboldt Canal (about 400 feet away); Butch Cassidy's Wild Bunch Bank Robbery (about 500 feet away); Winnemucca to the Sea Highway (approx. 0.2 miles away); California Trail - Trading Post (approx. 0.2 miles away); Winneva Building (approx. ¼ mile away); Pioneer Memorial Park (approx. 0.7 miles away). Touch for a list and map of all markers in Winnemucca. 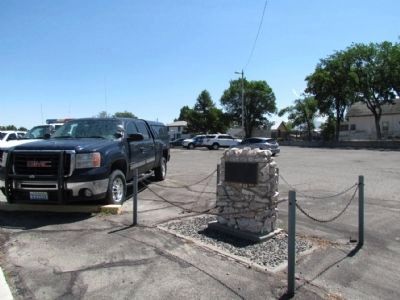