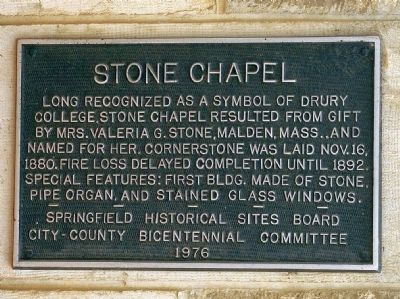 Photographed By M. Blakelylaw, July 5, 2012
1. Stone Chapel Marker
The only way to see this marker is to walk up to the church's front door. It will be on your right in the alcove before the door.
Inscription.
Stone Chapel. . Long recognized as a symbol of Drury College, Stone Chapel resulted from gift by Mrs. Valeria G. Stone, Malde, Mass., and named for her. Cornerstone was laid Nov.16, 1880. Fire loss delayed completion until 1892. Special features: first bldg. made of stone, pipe organ, and stained glass windows. --- Springfield Historical Sites Board City-County Bicentennial Committee 1976 . This historical marker was erected by City-County Bicentennial Committee, Springfield Historical Sites Board. It is in Springfield in Greene County Missouri

Topics. This historical marker is listed in these topic lists: Churches & Religion • Education. A significant historical month for this entry is October 1944.

Location. 37° 13.08′ N, 93° 17.22′ W. Marker is in Springfield, Missouri, in Greene County. Marker can be reached from the intersection of N. Benton Ave. and E. Central, on the right when traveling north. Parking is on the street on N. Benton Ave. Touch for map. Marker is at or near this postal address: 900 Block N Benton Ave, Springfield MO 65802, United States of America. Touch for directions.

Other nearby markers. At least 8 other markers are within walking distance of this marker. Civil War Entrenchments (about 300 feet away, measured in a direct line); Fairbanks Hall (about 400 feet away); 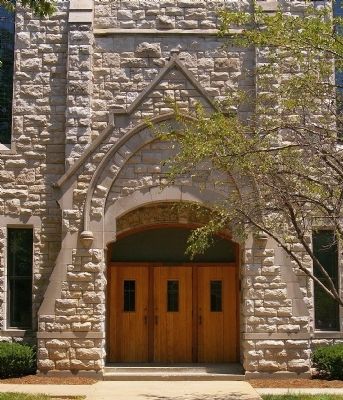 Photographed By M. Blakelylaw, July 5, 2012
2. Stone Chapel Door
Look very closely, and you can just make out the marker to the right of the door.

More about this marker. The Chapel's front door is inside an alcove. To see the marker you will have to walk all the way up to the front door. As you face the door, the marker is on the right alcove wall. You do not have to enter the Chapel.

Regarding Stone Chapel. Ask anyone who knows the town to name an iconic building in Springfield and chances are good that they will name Stone Chapel. The building was added to the National Register of Historic Places in 1982.

The chapel is on the grounds of Drury University, a school associated with the United Churches of Christ and the Disciples of Christ. Its total enrollment averages between 3,000-5,000 on a campus covering about 90-acres.﻿

Interesting aside - Mrs. Team Blakelylaw grew up in Springfield and never suspected the true story behind the chapel's name. She always thought it had to do with the building material. She ventures to say that almost everyone in town would also tell you that the building is called Stone 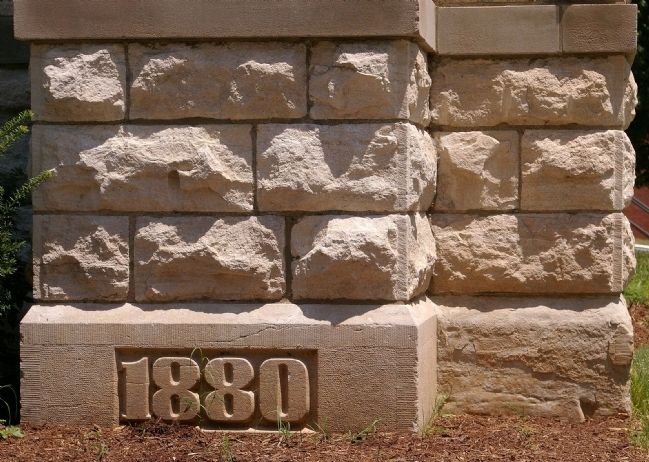 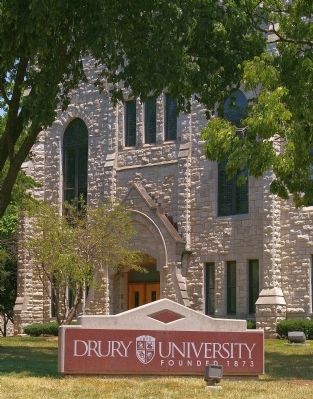 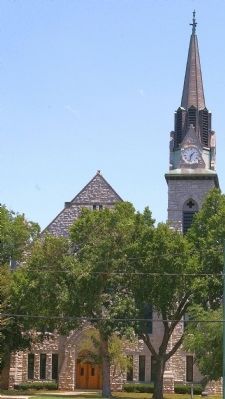 Photographed By M. Blakelylaw, July 5, 2012
5. Stone Chapel
The slabs of the walkway leading up the front door are inscribed with the years of various classes just after the start of the 20th Century. 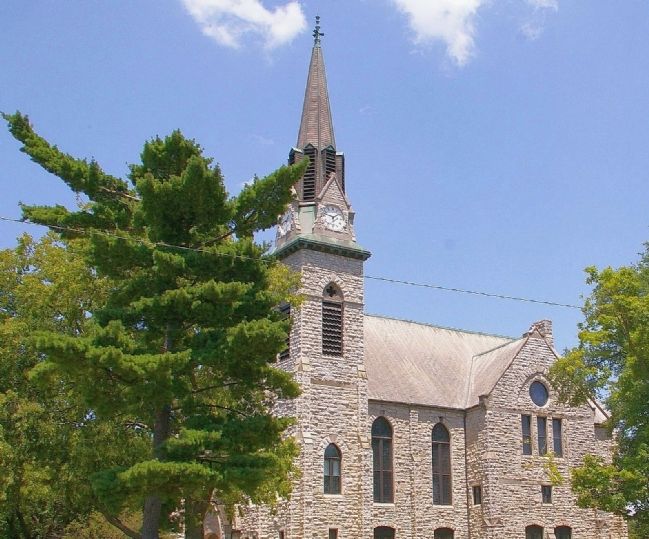