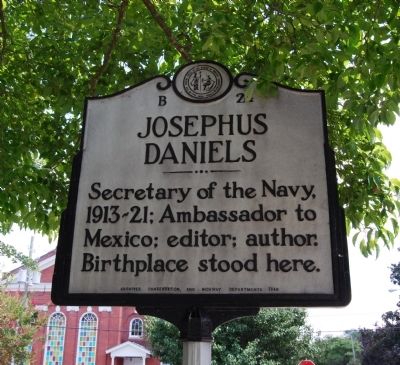 By Mike Wintermantel, August 10, 2013
1. Josephus Daniels Marker
Inscription.
Josephus Daniels. . Secretary of the Navy, 1913-21; Ambassador to Mexico; editor; author. Birthplace stood here. . This historical marker was erected in 1948 by Archives, Conservation and Highway Departments. It is in Washington in Beaufort County North Carolina

Erected 1948 by Archives, Conservation and Highway Departments. (Marker Number B-24.)

Topics and series. This historical marker is listed in these topic lists: Arts, Letters, Music • Communications. In addition, it is included in the Women's Suffrage 🗳️ series list. 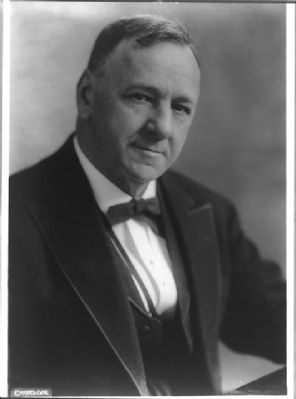 Regarding Josephus Daniels. Josephus Daniels, secretary of the navy and ambassador to Mexico, was born on May 18, 1862 in Washington, N.C., the son of Josephus and Mary Seabrook Daniels. His father, a Unionist, had been killed in January 1865 when Confederates fired on a steamship on which he was traveling. After the father’s death, Daniels’s mother moved the family to Wilson. As a young boy, Daniels was sent to the Wilson Collegiate Institute, a private boarding school.

While at school Daniels developed a love of journalism, and became local editor of the Wilson Advance after leaving the institute in 1880. Two years later Daniels bought the newspaper, and in 1885 purchased the Kinston Free Press in partnership with his brother Charles Daniels. That same year he purchased partial ownership of the Rocky Mount Reporter, and was appointed president of the North Carolina Press Association. Daniels, in partnership with Durham industrialist Julian S. Carr also purchased the Raleigh weekly, The State Chronicle. Although 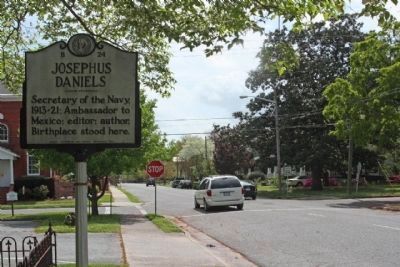 By Mike Stroud, April 19, 2013
3. Josephus Daniels Marker on East Main Street near North Harvey Street
the paper failed in 1892 after Daniels ventured to change its format to a daily, he subsequently began the North Carolinian, a successor to the Chronicle. He also found the time to marry Addie W. Bagley, granddaughter of Governor Jonathan Worth and sister of U.S. naval hero Worth Bagley.

Politically Daniels rode the line between a Democrat and Populist in his editorials. Although a strong supporter of antitrust legislation, free coinage of silver, and women’s suffrage, Daniels remained a loyal Democrat throughout his career. In 1892 he received an appointment to a post in the Department of the Interior. He held the position for two years before returning to North Carolina, having purchased at public auction the Raleigh News and Observer. He returned to a state in which the state legislature had been won recently by a Republican-Populist “fusion,” electing Daniel L. Russell, a Republican, as governor.

For the next several years, Daniels enthusiastically supported Democratic hopeful Charles B. Aycock for the governor’s position, although it meant resorting to warning the states’ citizens in the News and Observer of the impending “negro domination” and supporting a state constitutional amendment to disenfranchise most black voters. As circulation of Daniels’s paper increased, so did support for Aycock, who won the governorship and “regained 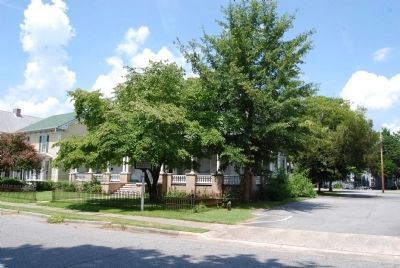 Because of his staunch support of the Democratic Party in the early 1900s, Daniels became close friends with President Woodrow Wilson. He served as Wilson’s publicity chief during the 1912 presidential campaign, and was appointed Secretary of the Navy in return, a post he held through both of Wilson’s terms in office. Although he angered Navy officers and sailors alike through his ban on alcoholic beverages, Daniels fought to provide the enlisted ranks with shipboard schools. The term “cup of joe” is based on the diminutive of Daniels’s first name. Its origins lie in the fact that coffee became the de facto substitute for a stronger drink among sailors.

In 1921, Daniels returned to Raleigh and his beloved newspaper. Under his direct guidance, circulation multiplied during the 1920s and 1930s. Daniels remained political on the state and local level, but focused his time on the newspaper and acting as a trustee for the University of North Carolina. In 1932, despite having recently been severely injured in an automobile accident, Daniels strongly supported the presidential campaign of Franklin D. Roosevelt. Roosevelt had served as Assistant Secretary of the Navy under Daniels during Woodrow Wilson’s presidency.

In 1934 Roosevelt appointed Daniels ambassador to Mexico, a post he held until 1941. In that year Daniels resigned in order to attend to his wife Addie who had been stricken with crippling arthritis. Late in life Daniels wrote a series of memoirs and, as a proponent of the New Deal and progressive politics, effectively penned a mea culpa for his youthful excesses on the race issue.

After his wife’s death in 1943, Daniels remained active until his own demise on January 3, 1948, from pneumonia. He was buried in Oakwood Cemetery in Raleigh. The couple had four children, all boys. Aside from Daniels extensive journalism and political accomplishments, he also had written ten books, mostly about the Wilson presidency. (North Carolina Office of Archives & History — Department of Cultural Resources)